Taken By Storm is the ultimate retrospective; a uniquely designed 'set of drawers' packed full of rare and beautiful objects created by Storm Thorgerson for his limited edition.

Designed to celebrate 40 years spent making the greatest album covers of all time including Pink Floyd's Dark Side of The Moon and Led Zeppelin's Houses of The Holy, each set is unique, featuring original Storm artwork specially commissioned and inset onto the top of each set of drawers and the rear of each book. Four hand-pulled silkscreen prints, signed and numbered by the artist and suitable for framing, are also included.

'It is a thing of beauty. A highlight for me are the prints. They look, and smell, so good! Many, many thanks.' M. Jolley, Subscriber, England

The author signed book contains thoughtful insight and commentary from Storm on the development of now iconic album covers such as Pink Floyd's Dark Side of the Moon and Led Zeppelin's Presence.

Gasoline 'Memory is a devilish thing, a slippery thing, you think you got it down and then it eludes you, like trying to catch a fish with bare hands. This image of eyes on trees is an exterior installation - hundreds of photos of eyes attached temporarily to silver birch trees, but its derivation I am not too sure about. Being an image of romance (romantic obsession) and paranoia. Alternatively I dimly recall a lateral association with the phrase 'the walls have ears' (more paranoia) so the trees have eyes but why trees? I don't know, I remember that they had to be silver birches, not some other tree, which may have have been a simple visual preference. Either way Rupert and Sam made a sterling effort to adorn every tree in sight making, I think, an effective and eye catching (oh my) image.' Storm Thorgerson

The Dark Side of the Moon 30th 'The stained glass window was made in the same proportions as the original design but substituting a deep purple hue for the black background since black glass does not admit any light and might defeat the whole purpose. The stained glass window was photographed outside against a winter sun (actually in the back garden of a house belonging to one of Pink Floyd) highlighting the texture and imperfections of the glass itself. All very radiant we thought, especially in the flesh.' Storm Thorgerson

Presence 'I was greatly impressed that Led Zeppelin, the mighty Led Zeppelin, could take this low key, off the wall, domestic semi-kitsch, partially retro design... so obscure really. Impressed and delighted because I always felt that the understatement adds to the power of the image.
A standard, bourgeois family - mum, dad and two kids - sit around a table in some strange marina (actually an indoor boat show) not to eat or commune but to examine an oddly shaped black object that seems to enthral them. Seems they don't need much else - the table is bare. Does the black object represent Led Zeppelin? All the family needs is to bask in their musical emanations.' Storm Thorgerson

Wish You Were Here 'It was very difficult to design this cover following the phenomenal success of The Dark Side Of The Moon. After prolonged conversations with all of the band, especially with Roger, it seemed that 'absence' was a recurring theme, especially absence of commitment - either to relationships or to work. There in the flesh but not in the spirit. At this moment in time, the band was beginning to drift apart and Roger was getting divorced. I racked my brains for good ideas as to how to represent 'absence' whilst being present. I went through the motions, until perchance we stumbled upon the notion of traces ie: shadows, footsteps, things that indicate presence but are in themselves insubstantial or not very present. These ideas became intermingled with empty gestures, maybe a handshake where people grip your hand warmly but don't mean too much. From there to absent emotions and thence to people who were absent for fear of being hurt, or burnt, and from that to a person on fire.' Storm Thorgerson

Born in Potters Bar in 1944, Storm attended the Cambridge High School for Boys along with Pink Floyd members Roger Waters and Syd Barrett. He started the Hipgnosis design studio in 1968 with Aubrey 'Po' Powell where he produced numerous album covers for rock 'n' roll bands. He is known for creating surrealist live 'events' painstakingly recorded on camera, with little to no digital manipulation or retouching.

The ultimate retrospective: a uniquely designed 'set of drawers' packed full of rare and exclusive objects, all created by Storm Thorgerson for his limited edition.

First out of your bespoke boxed set is an author-signed, leather-bound book of Storm's career. No two books are the same: Storm created an original artwork for the limited edition, with a personalised teacup for each of the 500 books. The first edition book has been completely rebound in luxuriant leather and features unique, new, endpapers.

With Taken By Storm you will own an original piece of Storm artwork, specially commissioned and inset onto the top of each set of drawers. Silkscreened in over 20 inks to allow for stunning detail and colour reproduction, these complex, hand-crafted prints are original works of art in their own right.

1.Division Bell, The. An alternate version - and originally the first choice - of the classic Pink Floyd album cover.
2.Peter Gabriel 1. The classic low-key and hand-coloured portrait from the cover of Peter Gabriel's 1977 album.
3.Graphica Obscura. Poster design for a 2002 exhibition of Storm's own work.
4.Pulse. The cover art of Pink Floyd's 2006 DVD release.


Storm ViewMaster with seven original pieces of artwork rendered in 3D for the first time
Storm's art is inherently three dimensional as a result of what he called his 'doing it for real' philosophy. Genesis wanted to present some of these iconic artworks in 3D for the first time, so chose seven pieces and had them painstakingly transferred into 'stereoscope'. Now, when seen through the accompanying custom-made ViewMaster, they appear as they never have before.
The Monograph
'Great design is about more than mind-blowing images.'
Presented here for the first time are some of Storm's logotypes for such great artists as Ian Dury, Alan Parsons and Pink Floyd. It also features examples of the oft-overlooked art of CD labels and booklets. This 16-page booklet is printed in two colours on heavyweight matt art paper. Size: 225mm x 148mm. Logotypes by Storm Thorgerson and Peter Curzon.

The Notebook of Unseen Ideas
'No great art is born fully realised, but is the result of the timely processes of careful thought and creative exploration.'

For Storm, the first step of the journey often involved preparatory sketches. This Notebook contains 'rough' drawings of ideas submitted to various rock 'n' roll bands and artists throughout the years - such as Bob Dylan, Pink Floyd, Johnny Cash and Jane's Addiction - reproduced here for the very first time. Printed on heavyweight, uncoated paper with blank pages for notes or, when inspiration strikes, your own sketches.

A Set of 12 Postcards
A selection of 12 postcards housed in a specially printed box, featuring a mixture of original and alternative designs, including this stunning reworking of Pink Floyd's Dark Side of the Moon - called 'Purple Monet' - originally intended to promote Roger Waters' solo tour of 2006. Eventually, the 'Green Monet' version presented in Taken By Storm made the cut. Why? Well, Monet sounds like 'Money'; and banknotes are green.

Storm's 'Reversible' Greetings Card
One Greetings card, two faces. Use once, turn upside down and use again. The inside is inscribed simply 'Happy' so can be used for almost any occasion. Write in pencil for maximum recyclability.


Specially-designed Playing Cards
Carefully created playing cards that show off the best of Storm's work. Even the traditional 'royalty' cards have been given the Storm treatment and the finished pack is exclusive to this limited edition. Finely reproduced on 300gsm card, you could think of this as a pack of miniature art prints. Rest assured these playing cards are not only beautiful, but totally functional as well. Made with solar block card, they have special metallic cores to prevent 'show through', so the possibility of cheating is practically nil.
12 Illustrated Coasters
Traditional pulp wood absorbent coasters - ok, beer mats - featuring previously unpublished, full colour sketches on one side, and a coaster-by-coaster typographic rendering of the book title on the reverse.


Limited Edition T-Shirt
Screen-printed in three colours, with Storm's logo on the back, only 500 will ever be made. Available in one size - fits all. 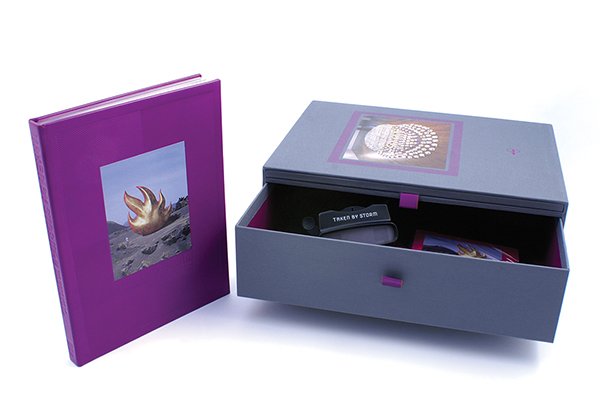 Celebrating 40 years of the greatest album covers of all time. Storm's credits include Pink Floyd's Dark Side of The Moon and Led Zeppelin's Houses of The Holy. 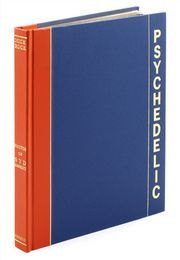