Dylan In Woodstock is a book of perhaps the most intimate photographs of Bob Dylan ever taken, and a fascinating insight into a period of astonishing creativity, which spawned the legendary Basement Tapes, Harding and Nashville Skyline albums.

But Bob Dylan's time in Woodstock was also a period where he withdrew from the public eye. American photographer Elliot Landy's beautifully atmospheric and informal photographs recover these lost years, capturing Dylan as he's never been seen since. They represent a unique collaboration between photographer and subject, each at the peak of his powers.


'In virtually every photograph, he seems contented, at ease with himself in a way that he had not been before, nor, for that matter, has been since.'  The Guardian

Beautifully simple images of those rustic Woodstock days have been brought together in this luxurious, suede-bound volume that, whether it's Bob taking out the trash or Bob in the sun-dappled reverie of creation, reveals a relaxed side to the man rarely seen.'  Q Magazine

'The most wonderful photographs of Dylan.' - The Rolling Stone

American photographer Elliott Landy was there in Woodstock during that period and captured probably the most striking and intimate photographs of Bob Dylan ever taken, including the iconic cover shot for Nashville Skyline.


Invited to photograph Dylan at his home, Elliott Landy created unique informal images - seated at the piano, bouncing on a trampoline, playing guitar on a garden bench, sitting on the porch, throwing out the trash - that give a fascinating insight into one of the most intriguing phases of Dylan's career.

Dylan's Woodstock sparring partners The Band were also the subject of many photo sessions with Elliott, who took the remarkable images that graced their ground-breaking albums Music From Big Pink and The Band, as well as shots in the studio, at various locations around Woodstock, and at Big Pink - the house where the Basement Tapes sessions were recorded with Dylan.
Dylan in Woodstock provides an unprecedented selection of unpublished pictures from the archive of Elliott Landy - over 120 photographs in black-and-white, the medium in which his work is best known, but also featuring 40 striking full-colour images and another 20 monochrome images printed in sepia or blue tints.

'When we arrived at Bob's house, we walked right into the living room, among all the people. I was quite nervous until Bob's wife Sara came over and asked me, very graciously and lovingly, if I wanted anything. She made me feel comfortable. I didn't see Bob, but he could have been there - I might not have recognised him. He was probably wearing his glasses and wouldn't have looked like his pictures. We were only there for a moment, because we did not find Levon. But I remember Sara coming to talk to us - she was stunningly beautiful, inside and out. That was our first brief meeting.' - Elliott Landy

'When I photograph, I work intuitively. For me photographing is a visceral as well as a visual experience.'

'Once the technical details are set, I stop thinking. For the most part I simply respond to what I see before me and focus solely on the forms in the viewfinder. I pay no attention to whether the subject's hair is straight, or from what angle I should be shooting - I'm just looking at the image and moving the camera to make it work. Afterwards I have minimal recollection of what has gone on around me. That's the only way I really like to work.' - Elliott Landy

Dylan in Woodstock is stunningly presented as a Genesis limited edition volume - designed, printed and bound to the matchless standards for which Genesis is renowned.

Collector copies are numbered 101-1750 and are quarter-bound in brown suede leather, to match the same brown suede coat that Bob wore in the cover photographs of three albums - Blonde on Blonde, John Wesley Harding and Nashville Skyline.

Elliott's famous Nashville Skyline image is reproduced on the front board of the book, which is housed in a handsome printed slipcase. Each copy is signed by Elliott Landy and individually numbered. 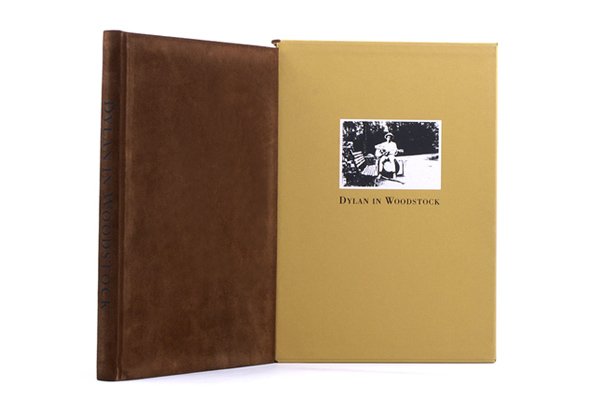 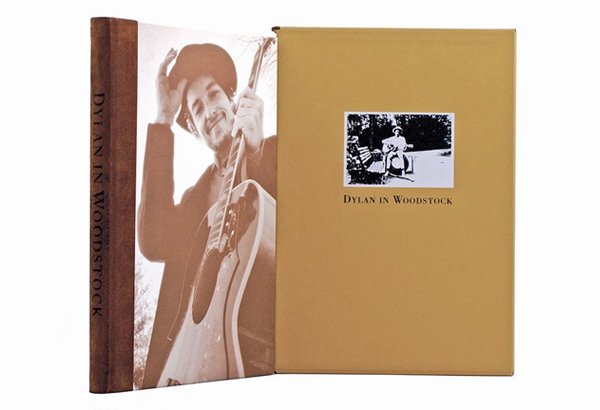 FULLY SUBSCRIBED. This edition is sold out.

In the Sixties, Elliott Landy was in Woodstock with Bob Dylan to capture probably the most striking and intimate photographs of Dylan ever taken, including the iconic cover shot for Nashville Skyline and numerous out-takes from that session.

FULLY SUBSCRIBED. This edition is sold out.

In the Sixties, Elliott Landy was in Woodstock with Bob Dylan to capture probably the most striking and intimate photographs of Dylan ever taken, including the iconic cover shot for Nashville Skyline and numerous out-takes from that session.