Voice of a Century

A hand-crafted, signed limited edition book celebrating British Vogue, with a wealth of photography, archival correspondence and interviews with 100 of Vogue's most respected contributors.

'An exquisitely crafted book that goes right to the heart of Vogue. This will be an anthology like no other.' Alexandra Shulman, Editor-in-Chief

In a landmark publication compiling photographs, illustrations, correspondence, covers and new interviews with 100 renowned Vogue contributors, Voice of a Century is an anthology like no other. Strictly limited to only 1,916 craftsman-bound copies, each 504-page volume is individually signed by at least 8 major contributors.

'Vogue is fashion. Vogue changes peoples view and their take on how they see things.'  Kate Moss

For 100 years British Vogue has set the scene in fashion beauty portraiture and lifestyle.

It has discovered and championed young designers, writers, artists, photographers and models; reported on changing patterns in fashion and social life; documented wars and cultural change and presented fashion from the most extraordinary places. Simultaneously reflecting and shaping British culture and history, its pages have been a vivid record of the times.

'It has discovered and nurtured some of the great photographers and designers of the 20th century. Long may it continue.' - Bianca Jagger

'Vogue is as relevant as ever, allowing us to dream while entertaining us and informing our opinions and tastes. While embracing the new, it never ignores history and context. It is timeless and ageless.' - Yasmin Le Bon

With unparalleled access to the British Vogue library and archives VOICE OF A CENTURY compiles a spectacular collection of classic photographs, illustrations, page spreads and covers, alongside personal insights from the people who helped create them.

'I first worked for Vogue in 1956 and I can't imagine life without it. I've always been very excited to see my pictures in the magazine. Vogue has been my life.' - Lord Snowdon

'I started to read Vogue when I was about 15. It was the era of the glamazon super model and I thought that Cindy and co were the most ravishing women I'd ever seen.' - Sophie Dahl

'The most elegant, the most avant-garde of all fashion magazines. It ushered in changes in society, in the way women were and the way women looked - men as well - and the way people felt about themselves.' - Nick Knight

'I feel very fortunate. As Terence Donovan used to say, "It's better than working in a bank."' - Grace Coddington

Spanning 504 pages the breathtaking visual material is accompanied by personal recollections and commentary from 100 of British Vogues most respected collaborators models designers and photographers.

'I remember going to the café around the corner from my school with my mum, to buy and look at the copy of Vogue I was in. I sat there surprised and awed by the surreality of being on the cover.' - Lily Cole

In recognition of British Vogues founding year VOICE OF A CENTURY is limited to just 1916 numbered and signed copies worldwide.

Craftsman-bound in sumptuous leathers with gold foil blocking and gilt page edging, Voice of a Century will be a collector's item for generations to come. The large format book (290 mm x 350 mm; 11.5 in x 14 in) is housed in a cloth-bound solander case. A shutter reveals an individually placed photograph from the Vogue archives.

'An exquisitely crafted book that goes right to the heart of Vogue.' - Alexandra Shulman, Editor-in-Chief

Each numbered copy is hand-signed by at least 8 contributors.

The signatures are entirely random to each copy and cannot be requested.

In this extended interview, Alexandra Shulman and other Vogue contributors, discuss what makes Vogue - A Voice of a Century so special.

'There have been many Vogue books published, but never a book such as this.' - Alexandra Shulman, Editor-in-Chief

Voice of a Century 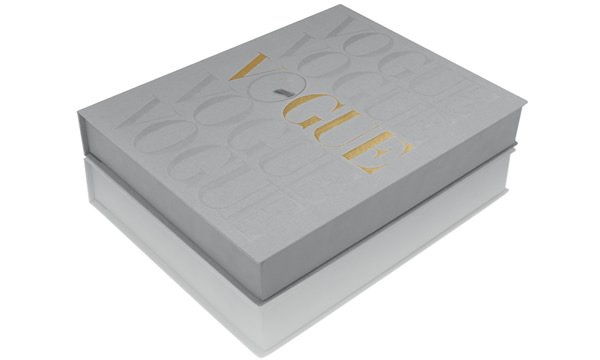 A hand-crafted, signed limited edition book celebrating the 2016 centenary of British Vogue, with a wealth of photography, archival correspondence and interviews with 100 of Vogue's most respected contributors.