The Collected Works of Jim Morrison

'Real poetry doesn't say anything, it just ticks off the possibilities. Opens all doors. You can walk through any one that suits you... And that's why poetry appeals to me so much  because it's so eternal.'  Jim Morrison

As a poet, writer, singer-songwriter, filmmaker and frontman to The Doors, Jim Morrison's body of work forms one of the twentieth century's greatest artistic legacies. Before his passing, Morrison proposed how this work might be published on a leaf of paper entitled 'Plan for Book'. Now, with the Estate of Jim Morrison, Genesis is honoured to fulfill his creative wish in an official three-book, multimedia boxed set, the ultimate celebration of Jim Morrison and his work: A GUIDE TO THE LABYRINTH.

Opening up the Morrison vaults, a large-format main volume presents more than 600 pages of poetry, lyrics, essays and ideas, both typeset and in Morrisons own handwriting throughout. Illustrated with over a hundred rare photographs, drawings, and items of memorabilia, Morrison's commentary narrates the collection, sourced from archival interviews. Exclusive, new text from his close friends and fellow musicians adds further insight. This signed and numbered, craftsman-bound edition is accompanied by spoken word recordings on a special 7 vinyl pressing, plus two actual-size reproduction notebooks, never-before-seen from the Jim Morrison archives:

 Jim Morrison's personal notebook 'Number 13'. Across 12 double-sided, spiral-bound pages, 'The Celebration of the Lizard' is handwritten here in its entirety, complete with Jim's stage directions. A recording of this performance piece was later released on the Doors' 1970 album, Absolutely Live

In 1969, Rolling Stone magazine asked Jim Morrison, 'Do you see yourself going more towards print?' He answered: 'That's my greatest hope. That's always been my dream.'

Genesis has been granted unlimited access to Jim Morrison's archives, including 28 of his personal notebooks, to curate the definitive survey of Morrison's work. Illustrated with rare and previously unpublished photographs, many from the family's own collections, drawings and items of historical ephemera are also included. Jim Morrison's work is presented in full in his own handwriting, as well as typeset. Jim used a variety of styles and sizes of blank-page notebooks to record his observations, compose poems, and sketch out plans for book and record projects. More than 350 original pages are displayed as close to actual size as possible, reproduced from the selection of notebooks, transcripts and annotated manuscripts found in the Morrison archive.

'He was a poet, ahead of his time, and uniquely Jim.' - Anne Morrison

Inspired by Jim Morrison's own plan for a book and produced in collaboration with his Estate, this official multimedia boxed set is an unparalleled document of Morrison's work, and one of the most authoritative limited editions ever to be published by Genesis.

'Personally, I could not get enough of Jim's writing: "Cars crawl past all stuffed with eyes, street lights shed their hollow glow. Your brain seems bruised with numb surprise. Still one place to go. Let me sleep all night in your soul kitchen." I mean, that is like fucking nothing I've ever heard in a rock song. So, I was down.' - John Densmore

For the first time, much of the writings that exist in Jim Morrison's own hand are compiled and presented together, accompanied by typeset transcripts and illustrated with photography spanning Morrison's lifetime. A GUIDE TO THE LABYRINTH includes:

 Published and self-published poetry, such as 'The New Creatures', 'Eyes', and 'The Anatomy of Rock', illustrated for the first time by the original pages and annotated manuscripts
 A handwritten manuscript of the poem 'An American Prayer'
 The poem 'As I Look Back', made up of autobiographical lines from Jim's notebooks arranged in chronological order, reproduced in full and in Jim's own handwriting
 A vast selection of unpublished poetry, verse, lyrics, treatments, and short essays
 A collection of loose page poems written on unbound sheets, backs of envelopes, and even cocktail napkins
 The complete published song lyrics
 30 unpublished song lyrics, such as 'Who Scared You', recorded during sessions for The Soft Parade but not included on the final album
 Journal pages and annotated transcripts of the songs and poems Jim recorded on two occasions. Firstly, at Elektra Studios, Los Angeles, March 1969; and secondly, at Village Recorders, Los Angeles, on his twenty-seventh birthday, December 8, 1970
 The original script from the never-released film, HWY, with hand-written markups
 As requested by Jim in his plan for this book, the never-before-seen Miami Trial notebooks. Following The Doors' infamous performance in Miami, Florida, on March 1, 1969, these are the six journals Jim used throughout his 1970 trial, featuring his observations and self-portrait doodles
 The 'Paris Journal' found in Morrison's Paris apartment, reproduced in full
 A commentary sourced from archive interviews with Jim Morrison
 New interviews from nearly 30 contributors
 Rare and previously unpublished photographs, drawings and ephemera
 Five poetry audio recordings

'Jim's words were something special and I think our music matched those words. I don't know any other three guys could have done that.' - Robby Krieger

Exclusive text contributions have also been amassed from those who knew Jim or have been inspired by him. The book's list of nearly 30 contributors includes Jim's Doors bandmates John Densmore and Robby Krieger, musicians Alice Cooper, Perry Farrell, Billy Gibbons, Ian McCulloch, Iggy Pop, Carlos Santana and Grace Slick, Doors engineer Bruce Botnick, original Doors manager Bill Siddons, head of Elektra Records Jac Holzman, dear friends and collaborators Frank Lisciandro and Babe Hill, as well as siblings Anne and Andy Morrison. Their testimony not only places much of the writings within the context of Jim's life and career, but also provides rare insight to Jim Morrison's personality and creative process.

A GUIDE TO THE LABYRINTH is hand-signed by Jim Morrison's Doors bandmates Robby Krieger and John Densmore, and his siblings, Anne Morrison and Andy Morrison.

Published in a limited run of only 2,000 signed and numbered copies, the edition's main volume is quarter-bound in vegan leather with green and gold foiling and gilt page edging. The large-format book (225mm x 300mm / 9" x 12") is presented in a solander box, which has been designed using lines of poetry in Morrison's own hand, taken from his personal notebooks.

'If my poetry aims to achieve anything, it's to deliver people from the limited ways in which they see and feel.' - Jim Morrison

Exclusive to this limited edition, all copies include a specially pressed 7" vinyl record plus two further volumes of work from the vault: precise replicas of notebooks 13 and 15, reproduced in full.

The first of the notebooks is spiral-bound and contains Morrison's performance piece 'The Celebration of the Lizard', which combines poetry, lyrics and music with sound cues and effects. The second notebook includes poems, notations, and doodles, as well as setlists and lines from iconic Doors songs.

The record features five poetry readings from a 1969 recording session at Elektra Studios ('Why Does My Mind Circle Around You', 'Thank You, O Lord', 'Moonshine Night', 'Indian Indian', and 'Science of Night').

'Not only did Jim Morrison deal in universal kinds of images and statements, but he was also himself a mythic, heroic figure, who lived his life in vital and dramatic terms.' - Ray Manzarek

Each signed copy in the limited edition is hand-crafted in Milan, Italy.

The Collected Works of Jim Morrison 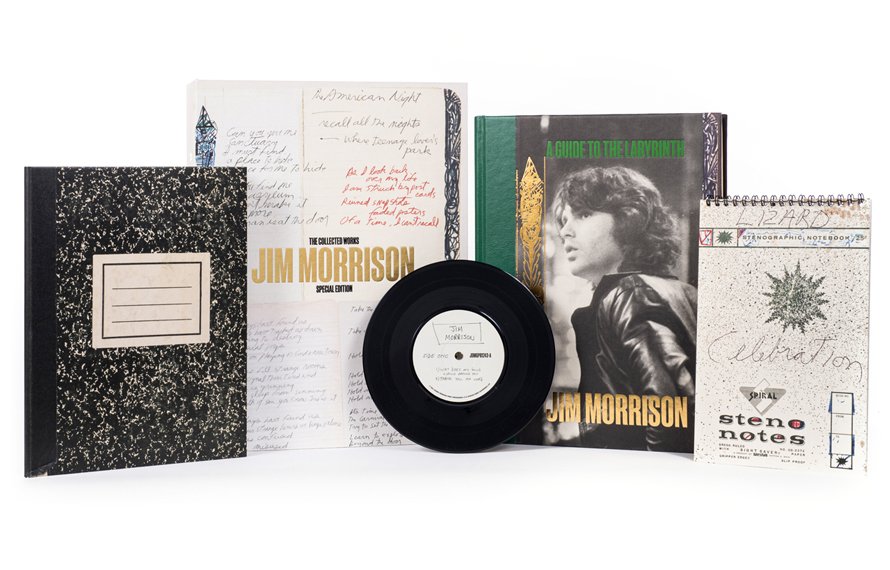 Before his passing, Jim Morrison proposed how a book of his work might be published. Now, in partnership with his Estate, Genesis is honoured to fulfill Morrison's creative wish in an official three-book, multimedia boxed set, the ultimate celebration of Jim Morrison and his work: A GUIDE TO THE LABYRINTH. 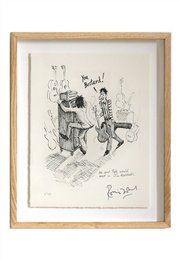