'This is a side of The Beatles  relaxed, comfortable and intrigued by a world that, for them, was new and exotic  that we don't often see. And thanks to Asai, we are virtually in the suite with them.'  Allan Kozinn

In 1966 The Beatles embarked on their last tour, playing concerts in 20 cities over the course of four months, beginning in London and ending in San Francisco. Millions of fans in England, Germany, Japan, the Philippines and America flocked to see the band. Hello, Goodbye: The Beatles in Tokyo, 1966 celebrates the Beatles' visit to Japan on this tour.

Taken by renowned Japanese photographer Shimpei Asai, his pictures are previously unpublished outside of Japan. They intimately capture a fleeting moment with all its controversy, Beatlemania and creativity, painting a poignant image of the band during their short but intense visit.

'Never before published outside of Japan, Asai's images give a surprisingly intimate glimpse into the Beatles' behind-the-scenes world during their final year as a live band.'  Rolling Stone

'I first heard The Beatles accidentally on the radio. I was just stunned. I pulled over in my car and stopped by the road and for a while I stared at the leaves of the trees trembling in the breeze.' - Shimpei Asai

Shimpei Asai is the only Japanese photographer to have gained access to The Beatles in Tokyo, and his photos have remained unknown to most outside Japan. They offer an intimate portrait of The Beatles in their first trip to the country, capturing their time on and off stage: performing, painting and experimenting with traditional Japanese instruments.

Following The Beatles from their arrival at Haneda Aiport to their departure for the Philippines, Asai captured everything from their hotel rooms to their live performances, all with a spontaneity which offers a glance into the lives of the Fab Four towards the end of their touring years.

'The same thing will never happen to another group. four personalities, their music, Brian Epstein and the staff who supported them, and the strong energy of fans made The Beatles.' - Shimpei Asai

Asai describes his experience of photographing The Beatles, recounts John Lennon and Paul McCartney's attempts to escape from their hotel to see the city, and revisits the atmosphere of their live performances.

The manuscript is introduced with an essay by journalist and author Allan Kozinn, who considers the historical significance of The Beatles visit and the turning point they were about to reach with the release of Revolver.

'When The Beatles left England on 23 June, the album was still unnamed. Revolver was a contender, along with Abracadabra and The Beatles on Safari. It was in Tokyo, during the endless hours they sat in their suite at the Hilton, that they finally settled the matter, and on 2 July they cabled their decision to EMI in London.' - Allan Kozinn

'A young photographer whose eye and lens caught both the public grandeur and intimate minutia of The Beatles Japanese visit.' - Allan Kozinn

Asai has won awards from the Tokyo Art Directors Club and the Tokyo Copywriter's Club. His work is regularly featured by Canon, and he has created award-winning movie posters, for films such as Parco.

In 1991, Asai opened a gallery for his work, the Seaside Museum in Chiba, and continues to work on various artistic projects, most recently combining his photos with Haiku poetry. As well as photography, Asai has also branched out into filmmaking, (writing, directing and filming Kidnapping Blues in 1982) and has made numerous Japanese TV appearances.

'Through Shimpei Asai's intimate lens, The Beatles seem relaxed in the eye of the storm. His beautifully presented Genesis collection captures the quartet on stage, chilling out, in Noh theatre masks, playing kotos in kimonos.' - MOJO

Quarter-bound in leather each copy in this hand-crafted edition is signed by photographer Shimpei Asai. Collector copies are numbered 351 to 1,966, to commemorate the year of The Beatles' visit to Tokyo. The cover is black buckram, silk-screen printed and gold-foiled with Asai's iconic photo of The Beatles' onstage at the Budokan.

Each copy comes in a slipcase printed with a traditional Japanese kimono pattern, and a logo type design inspired by the tickets from The Beatles 1966 shows. A ribbon bookmark with a facsimile ticket is included. Printed on art papers, at 25cm x 30cm (9.8 inches x 11.8 inches), The Beatles visit to Japan is revisited in over 204 pages of words and photographs. 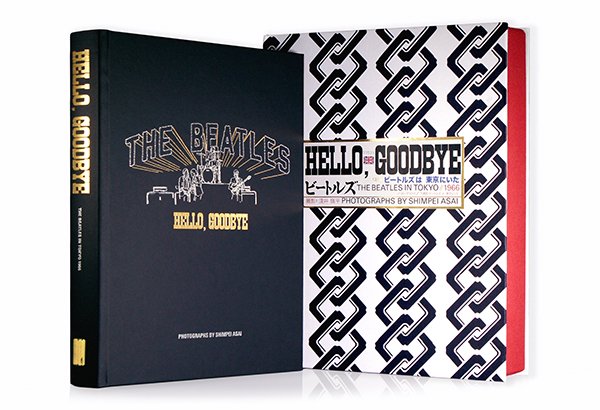 A limited edition of rare photographs documenting the Beatles' visit to Tokyo and their historic Budokan concerts. Taken by photographer Shimpei Asai, these pictures are previously unpublished outside of Japan. They offer an intimate portrait of The Beatles on and off stage during their final tour.

A limited edition of rare photographs documenting the Beatles' visit to Tokyo and their historic Budokan concerts. Taken by photographer Shimpei Asai, these pictures are previously unpublished outside of Japan. They offer an intimate portrait of The Beatles on and off stage during their final tour.