Faces, 1969-75 is the first-ever book by one of rock music's most-loved supergroups. With an original text written by Ronnie Wood, Kenney Jones, and the late Ian McLagan, their official history presents over 200 photographs that chart the band's brief but thrilling trajectory, from their formation in 1969 to their eventual split in 1975. Each copy is signed by the authors, Kenney Jones, Ian McLagan and Ronnie Wood.
THE FINAL COPIES
Ten years since Faces, 1969-75 was first published, Genesis is now releasing the final copies from this classic edition in a special red and gold binding. From a limited run of only 1,975 copies worldwide, just 300 now remain available.

Presenting a stunning mix of iconic and previously unpublished photographs, Faces, 1969-75 features over 200 images sourced from many of the world's greatest rock photographers, as well as the band's own private archives.

The resulting collection captures the chaotic intensity of the Faces' career: the incendiary live shows, the on-stage laughs and off-stage high-lives, the private jets, groupies, drink, drugs, clothes, haircuts and Holiday Inns.
'We looked good and we were having a good time, and the kids liked it. It was obvious that we were having fun.' - Ian McLagan

'It was all parties and rock'n'roll, everything you could think of a rock star should be doing and we did it to the fullest and beyond...' - Kenney Jones
'We were the sponsors of Holiday Inn and Marriott, and anywhere we could get banned from. We used to call them the Holiday Out. We used to check in as Fleetwood Mac; no hotel chain would have the Faces because of the damage and madness that went on... Half the audience would come back with us to the hotel. We would party with whoever was there and they'd all end up staying with us. The pilots would be thrown in the pool.' - Ronnie Wood

Featuring exclusive new interviews with Kenney Jones, Ian McLagan and Ronnie Wood, and archival quotes from Ronnie Lane, the band's official history includes introductions by famous Faces fans and collaborators: Slash, Paul Weller, Paul Westerberg, Mick Hucknall and Glen Matlock. Acclaimed music writer Brad Tolinski also provides a Foreword.
'We wrote 'Stay With Me' backstage, before we went on. Rod said, "Come up with a really great lick and I'll come up with the words," and we just had it going. Boom.' - Ronnie Wood
'With Ronnie and Rod our music was not as tight; it became a bit more elasticated, there was more freedom. A lot of our stuff had the feeling of a jam, because we used to jam a lot when we first got together and, like many bands, that's where we'd find riffs.' - Kenney Jones
'We played hard and fast. It was a hell of a four-piece, and there were no rules. We were driving each other and the arrangements got more and more complex. We were better than any other band!' - Ian McLagan

'Great haircuts, good clothes, fit birds, laughs and fun, football, drink and quality gear and The Music. In which order of preference or importance you care to place these things is up to you. For the Faces, did that matter?' - Paul Weller

The Faces were quite simply one of the finest rock groups ever to emerge from Britain. Rising from the ashes of The Small Faces, it was a band that blended some of the most talented musicians of the era - Ronnies Wood and Lane, Ian McLagan, Kenney Jones and Rod Stewart - to create a swaggering, booze-fuelled, funk-filled blues rock that was sublime on record and incomparable live.
'One of Britain's greatest contributions to rock'n'roll, the Faces' brand of pub swagger had the right combination of grit, charm, mischief, soul, style and wicked sense of humour, to make them one of the most iconic bands of all time.' - from the Foreword by Slash

The final 300 copies in the limited edition are numbered and signed by the Faces band members Kenney Jones, the late Ian McLagan and Ronnie Wood.

This official, 272-page, large-format book (250mm x 320mm / 9¾" x 12½") has been created to the authors' approval in every respect. Printed onto heavyweight matt art paper, Faces 1969-75 is traditionally hand-crafted in Milan, Italy. These final copies are specially bound in red leather and red cloth, with gold foil blocking and page edging. The Faces limited edition is presented in an archival slipcase, screen printed with poster artwork originally included with the band's 1971 album, A Nod Is As Good As A Wink...
'Brilliantly evocative... To see the Faces given a lavish picture-book treatment by Genesis seems only just, if long overdue.' - Classic Rock 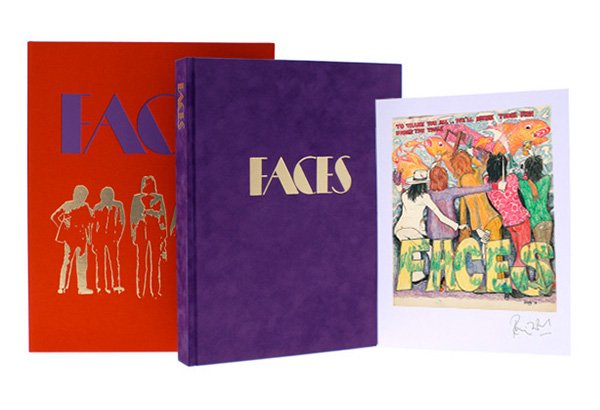 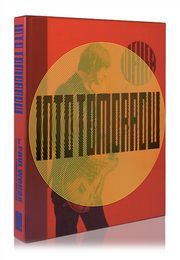