A Day In The Life records one historic day spent with The Beatles, as documented by award-winning photojournalist Michael Ward. His photo essay was shot during 24 hours during February, 1963  the day The Beatles discovered they had achieved their first UK No. 1 single.

This book and prints boxed set by the late Michael Ward is limited to only 750 copies. Each hand-signed Indian silk-bound case presents 24 large-format lithographs published for the first time, solely for this edition. Accompanying the artwork, a 64-page hand-signed and numbered book tells the story of one winter day spent with The Beatles in Liverpool.

'Michael Ward just happened to be shooting the Beatles the day they reached No. 1 for the first time They had woken that morning as aspiring pop idols. They went to bed that night as stars.'  The Sunday Times

On 19th February 1963, John, Paul, George and Ringo found out that 'Please Please Me' was Number One in the UK singles chart. That same day, photographer Michael Ward drove from London to photograph the band for a magazine article.

'I didn't know who they were, I'd never heard of them,' he joked. 'I wasn't interested in them and they weren't remotely interested in me - or in having their photographs taken!'

Once they became acquainted, Ward's photographs were to beautifully capture The Beatles on the cusp of Beatlemania. His observational images document the band strolling through the streets and along the docks of Liverpool, at Brian Epstein's NEMS offices, even rehearsing and performing one of their final gigs at The Cavern.

'The first thing that hit me about the Cavern was, "There's no light - how can I take pictures in this place?" I held the camera at 1/15th of a second - I don't think there are many pictures taken without flash in the Cavern.' - Michael Ward

'People seem to make it all very complicated but it's all really very simple - I just happened to be there.' - Michael Ward

Through extensive interviews with Michael Ward, A Day in the Life paints a picture of four young men whose lives were about to change.

A commentary volume accompanies the portfolio's fine art prints. Fine-screen printed on to heavyweight uncoated cream paper, in three special inks including copper, the 64-page book is bound by hand in midnight-blue Indian silk, with intricate gold and copper blocking on the front cover and copper page edging.

Each book is individually numbered and hand-signed by the late Michael Ward, an award-winning photo-journalist for over thirty years with both The London Evening Standard and The Sunday Times.

An annotated, hand-drawn map of the area provides the key to the day's events and sets the original location of every image.

A highly acclaimed photojournalist, the late Michael Ward took his photographs of The Beatles as a commission for a Sixties pop magazine. Aside from one or two frames, the historic photographs lay unseen for four decades.

'When you go on a shoot as a press photographer you do a group of pictures, choose the ones to be printed and forget the rest, and that's what happened here.' -

Limited to 750 signed and numbered copies worldwide, this beautiful boxed set will be treasured for many years to come.

The portfolio's 24 large-format prints can either be retained in the silk-bound, handcrafted case or individually framed as desired. Created from Ward's bromide prints, the 24 lithographs are made using four-colour inks, randomly-dot screened on to heavyweight 300gsm archival paper. For permanence, each photographic print is matt acrylic varnished, and certified with Michael Ward's embossing stamp (print size: 17" x 12.5").

The box itself features a neat recess in the base that contains the commentary volume: a 64-page book, also bound in Indian silk, hand-numbered and individually signed by the photographer, the late Michael Ward. Specially printed in three inks, the book reproduces each plate and the accompanying story behind the photographs, with explanatory text, location information and a hand-drawn period map. (Portfolio size: 18" length; 13.5" width; 1.5" depth) 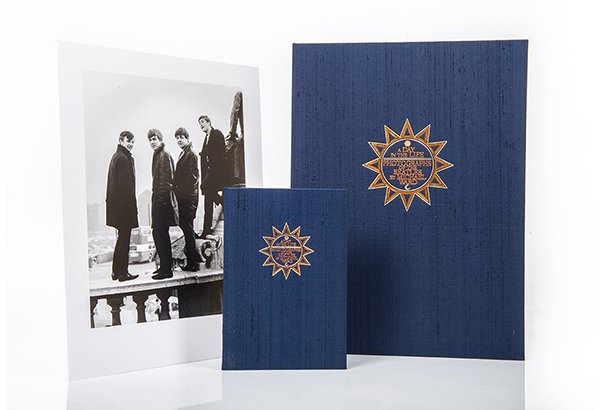 The Beatles as seen through the lens of the late Michael Ward in his signed book and print set.