From Station to Station is the untold story of three years writing, recording, performing, living and travelling with David Bowie. Friends since childhood, Geoff MacCormack joined Bowie's band as a backing singer following the release of Ziggy Stardust. He stayed by his side through six albums, five tours, one film and numerous adventures.

'Bowie wearing only his underwear while playing to adoring fans in Tokyo, meeting Russian villagers after stepping off the Trans-Siberian Railway or the filming The Man Who Fell to Earth in New Mexico McCormack's years with Bowie seem to have been "the freakiest show" - but it's clear that he had the time of his life.' BBC News

'During the part of 1973, I had two huge strokes of luck and good fortune. Firstly, while working in a London office I got a call from a childhood friend called David Jones. David Jones was now David Bowie and he invited me to join his band, The Spiders,

'The second piece of luck was that David wouldn't fly. Thus we would have to travel the thousands of miles around the world by ship, train and road.''

'At the end of the tour David, surprisingly, announced his retirement.Nevertheless I stayed with him for another two years, travelling and working on other tours - including Diamond Dogs and Young Americans - and six albums from Aladdin Sane to Station to Station.

From Station to Station is the story of those three amazing years, together with my previously unpublished photographs of Bowie at work and at play.' Geoff MacCormack

'We were every inch the freakiest show in town'

From Station to Station captures this 'freakiest show' in over 200 photographs and items of memorabilia, including tour programmes, tickets and letters, from the author's personal archives, nearly all of which are being published for the first time.

'Everywhere we went people stared in amazement but few had the courage to approach us...... We arrived in Nakhodka late in the evening. The short walk from ship to train was not an occasion that has stuck in my mind. The train, however, was memorable. On first sight it was encouraging; on entering we were dragged back to the time of the Czars. The dark wood panelling, brass fittings and tasselled decor made each car look like the interior of a Parisian brothel ..... The band I joined at the beginning of 1973 was basically an extension of Bowie's original Spiders. Apart from Mike Garson - who was already installed on piano and mellotron - I was one of four new recruits. We all stood at one side of the stage. I have to admit that it was like having a back stage pass but being allowed to join in.' Geoff MacCormack

Schooldays behind them, David Jones metamorphosed into David Bowie while Geoff worked at a string of clothes boutiques and even as a runner and occasional singer for the BBC Radio One DJ Emperor Rosko. But the two remained friends.

When David asked Geoff to join his band as a backing singer and percussionist, he was already well on the way to superstardom. The album Ziggy Stardust and The Spiders From Mars had conquered the UK charts six months previously in June of 1972. Bowie had played to a sold-out Carnegie Hall in New York in September and followed his debut US tour with a packed-out homecoming gig at London's Rainbow Theatre on Christmas Eve.

When Bowie returned to New York for a second US tour, in January 1973, Geoff played his first concert as The Spider's backing singer/percussionist at Radio City Music Hall in front of an audience that included Salvador Dali.

For the next three years Geoff was by Bowie's side, travelling through Japan, across Russia on the Trans-Siberian Express, through Paris and Rome, and all over the US. He was on stage when Bowie retired Ziggy Stardust. He helped record six albums, including Pin Ups, Diamond Dogs, Young Americans - at the legendary Sigma Sound Studios in Philadelphia - and, of course, Station To Station.

Published in a limited edition of only 2,000 copies, each book is individually numbered and signed by both Geoff MacCormack and David Bowie, who also provides the foreword.

David Bowie has signed a facsimile reproduction of an original 'While You Were Out' memo collected from the time he spent on the road, the sea and on the rail with school friend and companion Geoff MacCormack from 1973-76. The hand-signed bookplate is pasted onto the inside front cover of your limited edition book.

Every book is beautifully printed onto heavyweight art paper and bound by hand. Presented in a valise-style case which opens completely flat, refolds and magnetically fastens snugly around it, the book is finished with the title foil blocked in gold on the spine, and with gold page edging. 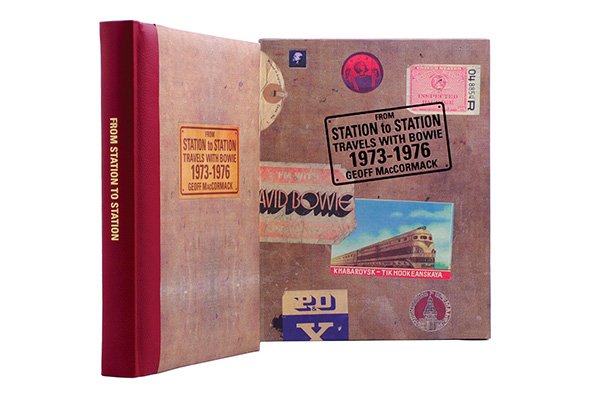 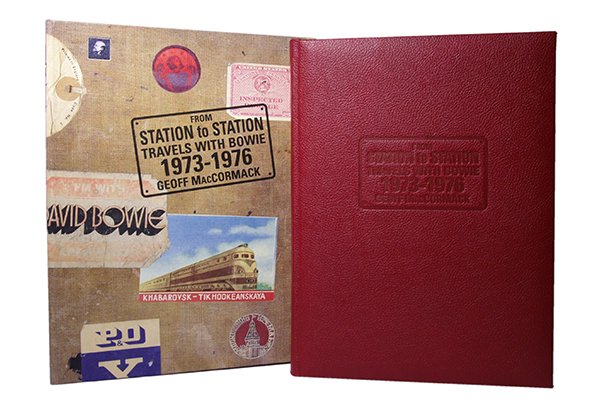