'He was a very bright and sparkly character Syd was impressive, even amongst a group of quite impressive people.'  Duggie Fields

Pink Floyd's founder member, original frontman, and primary songwriter, Syd Barrett, remains one of rock music's true cult figures. Recalled by the late Mick Rock as 'richly talented, totally unique and very beautiful,' Barrett and Rock met in Cambridge in the mid-1960s. Their friendship flourished and they subsequently lived and worked together in London from 1969 to '71.

'We were psychedelic renegades exploring an inner landscape where everything was turned upside down.'  Mick Rock

Psychedelic Renegades is a magnificent book of photography from the period, including the sessions that culminated in the cover for Barrett's first solo album, The Madcap Laughs. As well as the iconic portraits for which Rock and Barrett will be forever associated, many images are seen here for the first time and Rock's memories illuminate the work. The late artist Duggie Fields, Barrett's close friend and roommate, joins Rock in Pscyehdelic Renegades, sharing his own first-hand recollections of the times.

Only 2 copies of Psychedelic Renegades now remain, each signed by Mick Rock. Prior to Rock's passing, it was decided the final copies would include a special fine art print. Reproduced from the negative as a Giclée on Hahnemüle paper, this rare portrait is now published for the first time as a Mick Rock Estate-stamped print (size: 8" x 10" | 20.3 cm x 25.4 cm), exclusively for Genesis subscribers.

'The inspiration that Syd brought to my eyes and my lens set me on a path that has defined my own life and art.' - Mick Rock

Not only does Psychedelic Renegades exquisitely reproduce many of the most famous images of Syd Barrett ever taken, the edition also includes a wealth of previously unpublished photographs. Until the creation of Psychedelic Renegades, many of these portraits and observational images had remained unprinted from Mick Rock's original historic negatives.

'Now I can share them with you, gentle reader. In truth this is the first time I too have seen certain photos, which were either under or over-exposed and therefore did not register clearly on the contact sheets. Talk about a blast from the past...' - Mick Rock

'Most people have an image of Syd as a dark, brooding, secretive and inarticulate prince of psychedelia gone haywire. And that probably is a legitimate part of this curious tale, but it is only part of it.' - Mick Rock

Mick Rock shared a personal friendship with Syd Barrett which began at Cambridge and continued in London where at one point the pair shared a flat. In Psychedelic Renegades, Mick Rock tells their story for the first time.

'Syd was a beautiful man who got away with a lot because he was beautiful.' - Duggie Fields

The artist Duggie Fields joins Rock in swapping memories of the legendary musician. Fields' commentary offers an honest and revealing account, bringing to life the world inside the Earl's Court apartment where he and Barrett resided for three years. Many of Rock's most famous shots were taken here, including those of Barrett posed on the striped, painted floorboards of his bedroom immortalised in the Madcap cover photographs.

'Images and eye-witness accounts of a golden age that will never return.' - La Repubblica

Published in a limited edition of only 950 copies, each hand-bound book is numbered and signed by the author, Mick Rock.

The first 320 copies in the edition were Deluxe copies, which sold out soon after publication in 2001. Only 630 Collector copies will ever be created (copies numbered from 321 to 950), and only 2 now remain.

Superbly printed on 200gsm matt art, acid-free paper with gilt page edging, the Collector copies are quarter-bound in orange leather and turquoise binding cloth, blocked with gold lettering. Collector copies are housed in an archival slipcase, screen-printed with images of Syd Barrett onto the front and back.

To commemorate the end of this seminal edition, prior to Mick Rock's passing it was agreed the final copies would include a specially created fine art print. The selected portrait was shot to accompany an article Rock wrote for Rolling Stone in 1971. Taken in the basement of Barrett's mother's home in Cambridge, this beautiful monochrome image, one of Rock's last photographs of Barrett, is reproduced as an archival Giclée on heavyweight Hahnemühle paper. Individually stamped by the Mick Rock Estate, this rare print is suitable for framing (8" x10" | 20.3 cm x 25.4 cm).

'Syd was unique; he was the main man and Pink Floyd formed around him. When I first met David Bowie, he wanted to hear about Syd. We talked about how Syd had had it all. David's 'The Man Who Sold The World' always makes me think of Syd. It's a perfect description of him... a fabulous enigma.' - Mick Rock 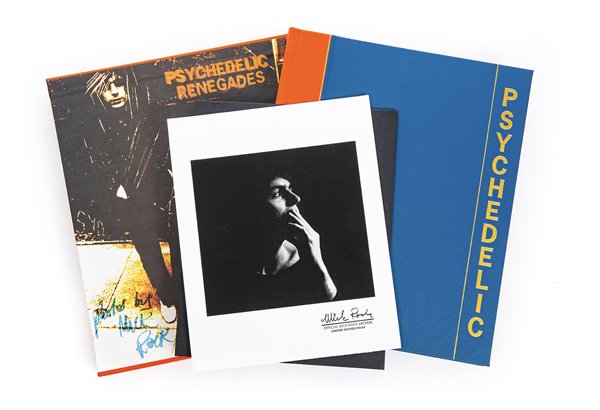 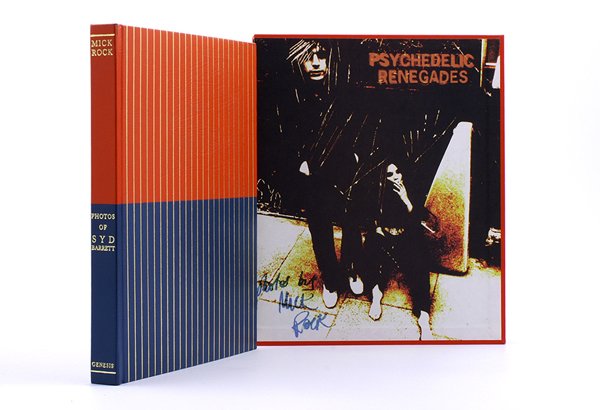