From Hamburg to Hollywood is a beautifully conceived retrospective of Jürgen Vollmer's life and work  told through his own design, stories and photographs  featuring written contributions from Jürgen's friends Paul McCartney and Klaus Voormann.

Beginning with Jürgen's recollections of his time spent with The Beatles in Hamburg in 1960, then moving on to Paris and an influential meeting with John and Paul, Jürgen goes on to recount his experience of Seventies New York, life in Hollywood, and his return to his native Hamburg after some 30 years.

'Meeting Jürgen Vollmer was a very important event in my life and the lives of the other Beatles. His sense of style and excellent photographic skills were to have a profound effect throughout our careers.'  Paul McCartney, from his foreword

From a selection of four classic images, each boxed set includes a choice of original photographic print made from the negative and signed by the photographer.

'Jürgen Vollmer was the first photographer to capture the beauty and spirit of The Beatles (tho' I say it myself)! We tried very hard to find someone with his touch after we returned from Hamburg - nobody could. He loved rockers, and rock 'n' roll... The photographs speak for themselves.' - John Lennon

The photographs that Jürgen Vollmer took of The Beatles at that most electrifying, unadulterated period in their lives have remained without equal. Jürgen Vollmer's photographs capture The Beatles before their image was transformed - in 1960, they were still sporting Elvis quiffs, ducktails, and black leather jackets. Their classic beauty is as evident as their historic significance, and every single frame taken by Jürgen of The Beatles has been included in this limited edition.

From assisting the German photographer Reinhart Wolf, Jürgen's career moved him to Paris in 1961, as assistant to the famous photographer and film director William Klein, and he lived for a decade as part of its influential rive gauche community. He became a movie stills photographer, working first in Europe, then America, and rising to become of the most sought-after portrait photographers in Hollywood.

Jürgen's studies of characters such as Rudolph Nureyev, and film stars from Catherine Deneuve to Arnold Schwartzenegger, complement perfectly his early Beatles photographs - collating instantly recognizable images with classics previously unseen. Together, these pictures give a first-hand insight into that peculiar visual talent from which The Beatles first and so handsomely profited.

In 1960, three German art-school 'existentialists', Klaus Voormann, Astrid Kirchherr and Jürgen Vollmer, walked into a rockers' basement club in Hamburg's Reeperbahn to find an unknown Liverpool band with a unique genius for rock 'n' roll; and history was made.

The creative spark that flared between these two groups transformed a generation. The band, of course, was The Beatles; Jürgen as rising photographer. To this day they acknowledge his very important role in the creation of that Beatle image.
'The Beatle haircut was in fact a "Jürgen" haircut' - Paul McCartney
Jürgen Vollmer's stories - some very funny, some poignant, all as eloquent as his images - capture in a few crisp words those moments, those thoughts, that helped create one legend and more: Who is walking past in John Lennon's famous doorway pose? How and when did The Beatles ask Jürgen for that haircut? And who was his mysterious double?
In FROM HAMBURG TO HOLLYWOOD, Jürgen Vollmer tells his story in full, with a foreword written by Paul McCartney and a middleword by Klaus Voormann.
'Remarkably powerful images and moving text... No mere photography book but a treasured work of art.' - Goldmine

Just 1,750 copies are to be created, each volume signed by its author, Jürgen Vollmer.

Designed by Jürgen himself, FROM HAMBURG TO HOLLYWOOD is an elegantly crafted quarter-bound volume of 130 pages, finished with silver page edging and housed in a replica photographic print case.

Crowning this magnificent boxed set, each copy comes with your choice of an original Beatles print signed by Jürgen Vollmer. Exclusive to FROM HAMBURG TO HOLLYWOOD, these traditional lab prints are made directly from the negative onto gloss photographic paper and are suitable for framing. (Print size: 8" x 6" / 20cm x 15cm). A choice of four prints is available: John, Paul, George, or a group portrait. Please make your selection below.

'One look at Vollmer's stunning photos of The Beatles in Hamburg - part of this lavish tome - will convert you instantly.' - Record Collector

Below: Select your choice of signed photographic print. 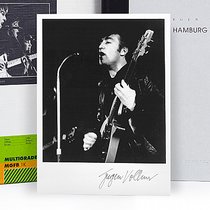 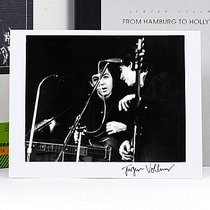 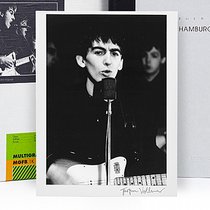 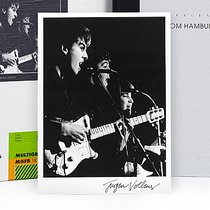 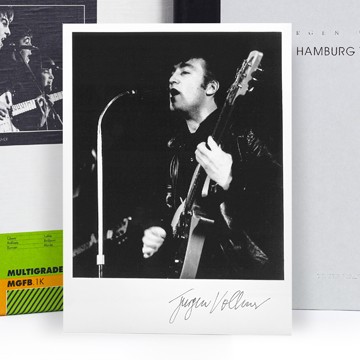 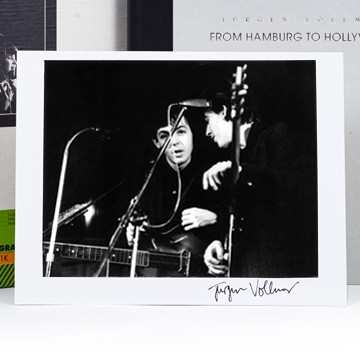 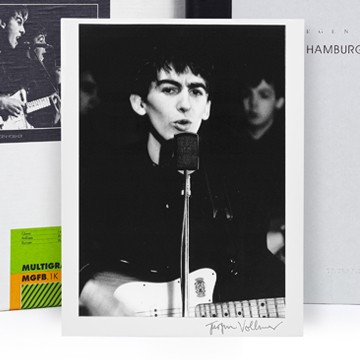