'I was experiencing a creative birth. I had the good fortune to have that experience captured by exactly the right photographer. Our rapport was unexpected. Spontaneous. Magical.' - Lenny Kravitz

Lightning strikes. A new sound explodes  one deeply rooted in the rich soil of rock, rhythm and soul. A new artist emerges, exuding bombastic energy and unrestrained love. An original and charismatic performer takes the world by storm.

Lenny Kravitz: The Formative Years reveals a panoramic visual landscape captured by photographer David Hindley who was given full access during the legendary tours, from 1989 through 1995, when Kravitz released his first three albums Let Love Rule, Mama Said and Are You Gonna Go My Way. Their work together continues to this day.
'Part of Lenny's uniqueness was in bringing past sounds into the present. I, too, lived in awe of classic photography. Our aesthetics were in sync.' - David Hindley

'Photographs are silent, but these are not. David's photographs are singing, shouting, even screaming. They're filled with the visceral thrill that he and I were both feeling.' - Lenny Kravitz

Lenny Kravitz: The Formative Years is a stunning photographic study of the emergence of an international star. Lenny Kravitz on stage and off, jamming with new fans like Mick Jagger, rehearsing with his bandmates, relaxing with family, laughing with friends. Lenny Kravitz sculpting his style, finding his voice, forging his look - adorned and unadorned, casual and outrageous, whimsical and wild.
'As a musician, Lenny was letting it rip. As a photographer, my charge was to do the same.' - David Hindley

All of this was captured by David Hindley, whose photographs are published here for the first time, more than 300 in total, offering an up-close and highly personal documentation of the birth of one of music's exciting and enduring creative forces.

'At this point I was better known in the UK and Europe. And it was there that I was just beginning to find my way on stage.' - Lenny Kravitz

In a deeply personal text, Lenny Kravitz speaks candidly about his inner world during his explosive rise to fame. This almost-6,000-word dialogue between Kravitz and David Hindley - photographer and friend - sees Kravitz open up about family, friendships, inspirations, encounters with Mick Jagger and Yoko Ono, songwriting and music. Through this, we receive unprecedented insight into Kravitz's most developmental years.

'John's work with Yoko, as well as Yoko's solo work, had touched my soul. Their music was brave and personal and inspired me on the path that led to 'Let Love Rule'.' - Lenny Kravitz
'These beautiful pictures show Lenny in his early years while he was experimenting with different styles and different looks.' - Mick Jagger

'The more styles of music you have in your palette, the more colours you can paint with.' - Lenny Kravitz

In a career of more than forty years, Lenny Kravitz has continued to be one of the most exciting performers in music. His genre-defying approach to music has continued to capture the soul of millions of fans across the world, and as a result, Kravitz has sold over 50 million albums worldwide. From 1999 to 2002, he won the Grammy Award for 'Best Male Rock Vocal Performance' every year, breaking the record for most consecutive wins in one category by a male artist.
In 2011, Kravitz was honoured with one of the highest cultural titles in France. He was made an Officer of Ordre des Arts et des Lettres by French cultural minister, Frederic Mitterrand, in Paris. Most recently, Kravitz released his eleventh studio album Raise Vibration, and soon after confirmed he is working on a follow-up.

Lenny Kravitz: The Formative Years is limited to 2,000 copies worldwide, each numbered and individually signed by the author, Lenny Kravitz. The first 350 copies are Deluxe copies.

Quarter-bound in black vegan leather with a cloth cover, the Deluxe copies are accompanied by an original photographic print of Lenny Kravitz, hand-numbered and signed by David Hindley, which is suitable for framing (size: 8" x 10" | 20cm x 25cm).
The Deluxe copies are housed in a solander box with yellow foiling and feature an inset photograph of Lenny Kravitz on the book's front cover.
'The result is as beautiful as its subject' - Classic Rock

Each Collector copy is hand-numbered and individually signed by the author, Lenny Kravitz. 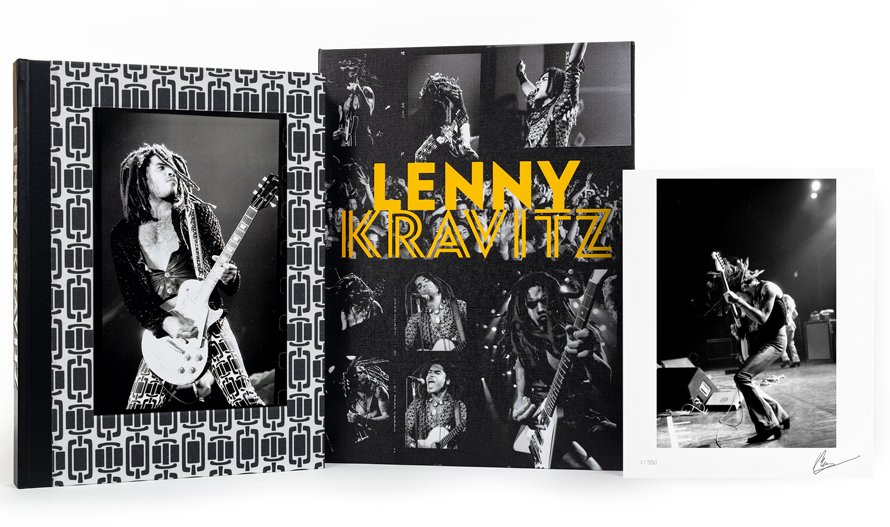 An official limited edition book by one of musics biggest forces  Lenny Kravitz. Introducing a previously unpublished collection of photographs charting Kravitz's rise to fame, from 1989 until 1993, with a candid commentary from Kravitz.

An official limited edition book by one of musics biggest forces  Lenny Kravitz. Introducing a previously unpublished collection of photographs charting Kravitz's rise to fame, from 1989 until 1993, with a candid commentary from Kravitz.