The Lyrics of Jim Capaldi

In celebration of the life and lyrics of Traffic's drummer, poet and founder - the late Jim Capaldi - over 70 handwritten lyrics are illustrated with images of Traffic, and illuminated with the recollections of 40 legendary contributors.

Mr Fantasy is a limited edition of only 900 copies. Signed by Steve Winwood, Aninha Capaldi and Robert Plant.

'Traffic's songs and the imagery of Jim Capaldi's lyrics brought us adventures and characters that vibrated through the psychedelic underground.' Robert Plant

'The Sixties to me were the most important years in humankind! Traffic became a reality in 1966. I'd already started writing songs in the previous bands so I naturally took the role of lyricist.' Jim Capaldi

Jim was the lyricist behind Traffic's 11 albums, including the hit songs 'Dear Mr. Fantasy', '40,000 Headmen' and 'Paper Sun'. Originally inspired by The Beatles, Jim wrote for the Eagles and played alongside George Harrison, Eric Clapton and Jimi Hendrix

His handwritten lyrics have been reproduced in facsimile, complete with doodles, typos and alterations to reveal the process behind the words that changed the face of music.

'As you read these lyrics, ask yourself if anyone in rock ever wrote better. The pirate poet indeed. Jim was a real rough diamond... I loved him.' Tom Petty

Jim began work on this book before his death in 2005. He provided us with text, giving insight into his inspiration and describing his prolific 40-year song writing partnership with Steve Winwood.

'I'd had this idea for a lyric and that evening while half asleep I managed to finish it off in my head. I got up, wrote it down and went and woke up Steve; it must have been around 4.30 or 5.00 in the morning. Then we went in to the little living room where there was an old upright piano and finished it. It was the first song we wrote together.' Jim Capaldi

'All these bits of paper would be knocking about and while we were jamming, if I could find a way to sing something that was written down I would just sing it. That's how we created our songs... He was a life-long brother-musician to me and we spent a lot of time together, had a great affection for each other, and understood each other and the way we worked. It's slightly sad, but, for me, Traffic can never be without Jim.' Steve Winwood

'Jim was one of the most influential songwriters, not only of his generation but in the history of popular music culture. He attacked life with an energy and passion and left a rich legacy. He leaves a benchmark for today's writers and musicians to emulate.' John Taylor

Over 30 pre-eminent musicians have paid tribute to their friend in this special limited edition. Musicians including Paul Weller, Steven Van Zandt and Dave Matthews speak of the impact Jim Capaldi has made on their work.

'Maybe it was the place - it was definitely the time. The arrival of Traffic's songs and the imagery of Jim Capaldi's lyrics drove forward and then ahead on a vast surge of beautiful hope and otherworldliness.' Robert Plant

Robert Plant writes the Foreword to Mr Fantasy and Jim's wife Aninha Capaldi provides the introduction. Both have personally signed each copy, along with Steve Winwood.

'One of his last wishes was for me to complete what he had started and I promised him I would.' Aninha Capaldi

Photographs of Jim with his band, friends and family illustrate their words. Taken by renowned photographers and selected from the family's personal archives, they show him performing, relaxing, and exploring the countryside near Traffic's secluded Berkshire cottage.

'When I hear Traffic records and look back on those years, I don't really think of festivals and clubs and rock 'n' roll, I think of tracks on the Berkshire Downs, crows over a coppice. It was a very powerful experience.' Jim Capaldi

'Jim lit up the room whenever he walked in. He had this presence that drew people to him. He was kind and generous and more than anything he had soul... He was my brother.' Simon Kirke

Over 30 friends and musicians have contributed to Mr Fantasy, including:

A limited edition of only 900 copies worldwide, each copy of Mr Fantasy is signed by Aninha Capaldi and legendary singer-songwriters Steve Winwood and Robert Plant.

The book is full-bound in Milan with silkscreen artwork onto fine-grain leather, with gold foil blocking and blind embossing to replicate a page from Jim's notebook. Some of the book's gilt-edged pages are hand-cut to mimic the torn edges of Jim's lyric sheets.
The finished volume is presented in a hand-made folding solander box with gold embossed artwork. A specially created 7" single in purple vinyl is also included. Side A features a reggae version of '40,000 Headmen' and Side B is a demo of 'State of Grace'. Accompanying each copy in the limited edition is a reproduction of David Oxtoby's colour etching 'Rock On JC', composed in 1974 available exclusively with this limited edition.
'I have tried to portray this romantic Romany during a live performance. He's at ease with the blast-furnace of his environment, adrenalin pumping, enjoying completely the heat and sounds of his own creation.' Dave Oxtoby

Traffic performing 'Dear Mr Fantasy', one of the many songs written by their late drummer and lyricist, Jim Capaldi.

'I knew Jim pretty well. He took part in the Eric Clapton Rainbow concert in 1973. He was an extraordinary artisan on the drums - a real musician as well as a drummer. But for years I had no idea he wrote the sublime lyrics behind Traffic.' Pete Townshend

'It was an honour to induct Traffic into the Rock And Roll Hall of Fame and finally meet Jim Capaldi. I grew up listening to him and he was certainly part of what pushed me towards a life in music.' Dave Matthews

The Lyrics of Jim Capaldi 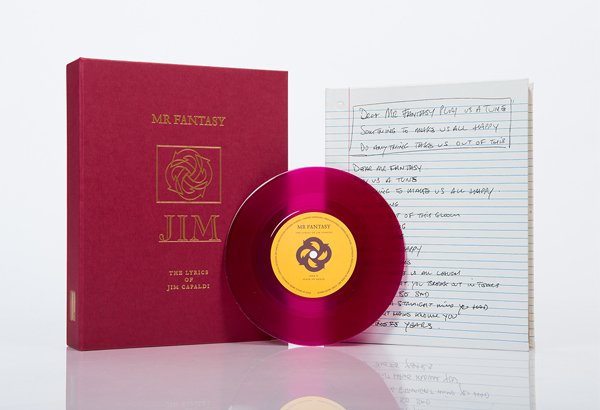 A celebration of the life and lyrics of Traffic's drummer, poet and founder, Jim Capaldi. Over 70 handwritten lyrics are illustrated by images of Traffic and the recollections of 40 legendary contributors including Pete Townshend, Tom Petty, Paul Weller ... Read more.