During his momentous voyage aboard HMS Beagle, Charles Darwin made a series of observations that led him seriously to question, for the first time, the literal truth of the Bible. Like most people, he had accepted Archbishop Ussher's calculation of 4004BC as the date of the world's creation. He was familiar with Lamarck's theory of evolution, but dismissed it as blasphemous nonsense.

The Galapagos Islands were to provide the most illuminating experience of that long voyage. Each island, though only 50-odd miles from its neighbours, had its own species: 'This appears to be one of those admirable provisions of Infinite Wisdom by which each created thing is adapted to the place for which it was intended.'
Covering the pages of his Journal in that tiny, cramped cabin, Charles Darwin brought forth the outlines of a theory that was to shake the thinking world. The Journal of a Voyage in HMS Beagle is a facsimile of Darwin's journal made in his own handwriting.
Published in a limited edition of only 500 copies with a foreword by HRH Prince Charles The Prince of Wales, each craftsman-bound volume is signed by George Darwin, great grandson of Charles Darwin.

In 1832 a 23-year-old naturalist by the name of Charles Darwin sailed aboard HMS Beagle on a voyage of exploration and discovery. He was to bring forth the outline of a theory of evolution that was to divide the scientific world right up to the present day. 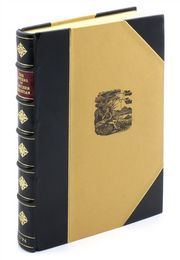