Yoko Ono in the Herald Sun 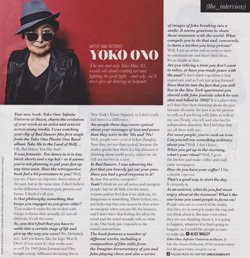 Amidst the excitement of her busy schedule, Yoko took the time to speak to Melbournes Sunday Herald Sun about creating her retrospective book, YOKO ONO INFINITE UNIVERSE AT DAWN.

I have an objective observation of the past, but at the same time, I don't believe in the difference between past, present and future. I think it's all now.  Yoko Ono, Sunday Herald Sun, 2014

She also explained how she feels about revealing intimate moments with John Lennon in her new publication.

I am an artist and an artist is there to communicate and share their ideas. Its as simple as that.  Yoko Ono, Sunday Herald Sun, 2014

You can pre-order YOKO ONO INFINITE UNIVERSE AT DAWN Deluxe copies (numbers 1-350) and register for updates about Collector copies (numbers 351-1,500) at www.YokoBook.com. Mossgreen Gallery, Melbourne, will be holding an excusive preview of Yokos limited edition next month. For more details about the exhibit, click here.