Home  »  Latest News  »  Yoko Ono and MoMA, Together at Last

Yoko Ono and MoMA, Together at Last 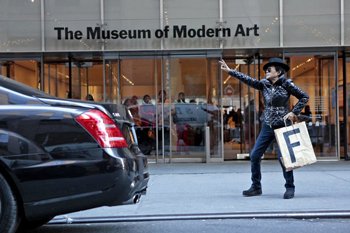 The New York Times are praising MoMAs choice of featured artist: Yoko Ono. Her one-woman show will run at New Yorks Museum of Modern Art from May 17th until September 7th. Click here for more details.
Yoko Ono in the 60s was a historically important, groundbreaking, influential artist, working in London and Tokyo and New York. Her achievement as an artist is nearly hidden by her fame; we want to uncover it.  Klaus Biesenbach, chief curator at MoMA
Yoko Onos groundbreaking art over eight decades is chronicled in her limited edition series, YOKO ONO INFINITE UNIVERSE AT DAWN. To celebrate Yoko Onos MoMa show, we are offering free shipping on all orders of her signed books and prints until June 30th. Simply enter MOMA at checkout.
Above: Yoko Ono recreates the poster for her fictitious one woman show at Museum of Modern (F)Art, 1971. Photo courtesy of Kishin Shinoyama/Lenono Photo Archive