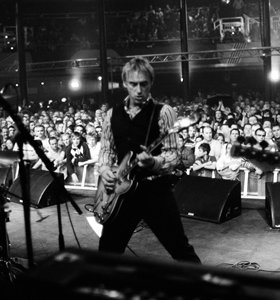 Paul Weller has just finished a run of American and Canadian tour dates. He kicked things off at Riot Fest and Carnival in Toronto, before playing intimate venues across the United States. If you weren't lucky enough to attend, you can still click here to see his performance of 'Heatwave' in Detroit. Weller also played Minneapolis, Cincinnati, Ohio and Chicago to great reviews.
'Physically, Weller is in amazing shape. Vocally, he still sounded good, although I wish he spoke more between songs. Highlight of his set, were the encores. Yes, that's encores, with an 's'. It was well worth the wait until the end of the show. Again, thank you Paul Weller for choosing to play a small venue in Minneapolis. We were very lucky to have him.' - Review of Paul Weller at the Varsity Theater, Minneapolis (10 Sep 2014) by We Heart Music
Before the Minneapolis show, Paul Weller spoke to Gimme Noise about his new release, More Modern Classics.
'I just came to realise how much material had been released over the last 15-16 years. I'm not trying to sound arrogant or anything, but I thought there was a lot of good stuff there, really. And I just wanted it catalogued more than anything. It's just nice to think that it's up there on the shelves.' - Paul Weller
The same can be said for Weller's upcoming limited edition, INTO TOMORROW, which chronicles his entire solo career in photographs. Fill in the below form to register your interest and be the first to receive updates.
Above: Paul Weller in New York, 2007 © Lawrence Watson, taken from INTO TOMORROW.