This year marks the 60th anniversary of the Rolling Stones. Since 1962, the band has released 92 albums, 121 singles and has performed in over 2,000 concerts worldwide - more than earning their early moniker as the 'Greatest Rock and Roll Band in the World'. Three Grammy Awards and a Grammy Lifetime Achievement Award plus estimated record sales of 200 million have made them one of the best-selling music artists of all time.
To celebrate this extraordinary anniversary and this exceptional band, we are pleased to announce our latest limited edition, HOT STUFF: The Story of The Rolling Stones. HOT STUFF presents the largest collection of Rolling Stones memorabilia in the world, chronicling the band's history from their inception in 1962 to the present day, including their latest 2021 tour, the No Filter Tour,​ and featuring additional chapters on each band member's solo career.
'Incredible!! It's all there.' - Keith Richards


A landmark Genesis edition, HOT STUFF is strictly limited to only 500 copies worldwide and comes with at least five pieces of genuine, vintage Rolling Stones memorabilia included within each Deluxe boxed set. With HOT STUFF being so limited due to the rarity of the original memorabilia included, we expect this edition to be one of our fastest-ever sell-out titles.

To find out more and secure your copy, click here. 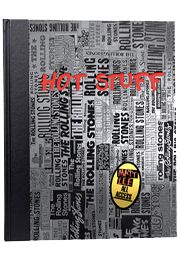