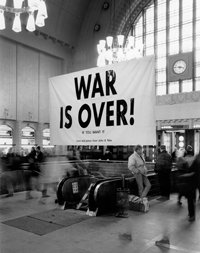 The book is a celebration of Ono's considerable influence on the artistic landscape, presenting a body of work that not only spans a vast array of genres, but also draws a straight line from the 1960s to the modern era, a time of massive social and political upheaval  At a time when the utopian dreams of the counter-culture have never felt more vital or more distant, Infinite Universe is a refreshingly optimistic salve.  Wallpaper magazine

You can read the review in full by clicking here, and find out more about Yoko Onos signed limited edition at www.YokoBook.com