Pre-order now: CSN&Y: Love the One You're With

With their unique vocal blend and a musical approach that ranged from acoustic folk to melodic pop to classic rock, supergroup CSN&Y created some of the most beloved songs of the Sixties and Seventies. The story of one of the world's most famous vocal harmony groups has been one of extremes: break ups and make ups, sublime musical chemistry and creative conflict, reunions and solo endeavours.
Throughout, their enormous cultural impact has remained inarguable. Documenting it all from the band's very beginning was renowned rock photographer, Henry Diltz. A fellow musician and a friend, his camera has captured CSN&Y through five decades of collective and individual milestones. With an introduction by Graham Nash and presenting Henry Diltz's remarkable CSN&Y archive, Genesis is delighted to announce CSN&Y: Love the One You're With - a celebration of the band and its individual members, documented through 1,000 photographs and 34,000 words from 20 contributors.
'I have known these guys my entire life as a photographer, way before they even formed a group and so I have photographed them all separately and together for the past almost 60 years.' - Henry Diltz
With a Foreword by Graham Nash, the 34,000-word manuscript has been garnered by CSN&Y biographer Dave Zimmer from both new and archive interviews with Henry Diltz and members of CSN&Y, alongside recollections of fellow musicians, friends, music industry figures, journalists and peers.

Alongside Henry's own treasured reflections are his many journal entries, which place the photographs squarely in the context of the times. 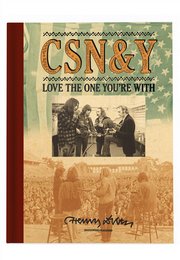