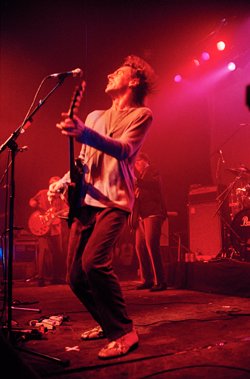 Paul Weller has now completed his much-anticipated European tour, during which he played at some of his favourite venues, including Amsterdam's Paradiso.
'If I hadn't made it [as a musician], I would never have got to travel. In my time, if somebody down the road went on holiday to Spain, it was a big deal. Music for me has been the whole key. How else would I be sitting in Amsterdam in the sunshine with a beer? I owe it all to music.' - Paul Weller interviewed during the recording of Studio 150 in Amsterdam, 2005
Paul's performance at Paradiso on 11 November 1994 was voted the year's best performance by Dutch magazine OR. Photographer Lawrence Watson, who has documented Paul's career from 1988 until today, was there to capture the magic on camera (pictured left). Paul and Lawrence's friendship is documented in their forthcoming limited edition, INTO TOMORROW. For more details, register your interest below.