On Sunday, Olivia Harrison and Martin Scorsese took to the stage at 92nd Street Y in New York to discuss Olivia's new book of poetry, Came the Lightening, Twenty Poems for George. To a full house, Olivia and Martin chatted about her poems, her style of writing, the inspiration for her poems and her life with George Harrison.

Scorsese remarked about the book, 'This is unique, this is very different, these twenty poems are an autobiography.'

Olivia agreed that the poems were autobiographical but said, 'I never wanted to do an autobiography or a memoir,' and spoke of how she came to poetry after a bout of amnesia, having been given the advice to read poetry to help her recover. This then influenced the form her writing took. 'I didn't choose the form, the form sort of chose me.'

Olivia read verses from her works recalling how she was a 'fly on the wall' in the early years observing all the people that came in and out of George's life, the first being Eric Clapton who is mentioned in the poem 'My Arrival.' She told of how George took up gardening when he became ill, determined to create a new woodland space at Friar Park, inspired by the Liverpool parks of his childhood. And she spoke of how she travelled with her son, Dhani Harrison to India with George's ashes.

Throughout the informal and intimate conversation the audience was rapt with the event finished to rousing applause.

Came the Lightening: Twenty Poems for George is available to buy as a bookstore and as a signed, limited edition version. Go to OliviaHarrisonBook.com to get your copy. 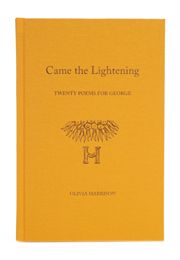