The Cavern Club Celebrate 50 Years of The Beatles 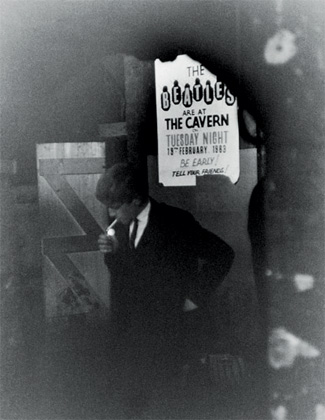 Fifty years ago today, 9th February 1961, The Beatles played their first gig at what is now one of the most famous clubs in the world, The Cavern Club in Liverpool, UK. It was a non-advertised début at a lunchtime slot and their fee was just £5 (which is approximately £85 in today's money).

From this inauspicious start, just before George Harrison's 18th birthday, they grew into the phenomenon that would take the world by storm. Just one year later in February 1962 Brian Epstein would meet Parlophone's A&R man, George Martin, and the following year on the 19th February 1963 they would be photographed at the Cavern club by Michael Ward after hearing that they had achieved their first UK Number One single.

To celebrate this occasion the Mathew Street venue is hosting an evening dedicated to the Fab Four and ITV1 (UK) is showing a documentary on the club with original footage, music and photographs at 10.40pm tonight, 9th February 2011.

Michael Ward's rare and previously unseen photographs can be found in
A DAY IN THE LIFE which charts just one day in the life of The Beatles as they were photographed around Liverpool and culminates in a performance at the Cavern. Click here to read more...

THE BEATLES IN GERMANY continues the story from 1960 and the band's move to Hamburg in Germany where they would hone their craft. It includes many iconic photographs taken from the Top Ten club previously unpublished. Click here to read more...

To see all the books on The Beatles simply click here...

Left: George Harrison at the Cavern Club in 1963, taken by Michael Ward and part of the limited edition portfolio 'A Day In The Life'.