Jimmy Page Tells the Stories Behind the Photographs

'With the guitars, I wanted to get really close up and personal with the angles taken... have a point of view as a guitarist would.' - Jimmy Page

As the Open Edition, Jimmy Page: The Anthology, hits book shops around the world, we take a closer look at the images from the book that have been chosen for The Anthology Print Portfolio.

The Anthology Print Portfolio presents six images from the book (one is already fully subscribed, five are available to order) featuring Jimmy Page's iconic guitars, costumes and equipment. Every piece was photographed under his art direction and brought to life with in-depth commentary, placing it within the story of a phenomenal career.

Here we take a deep dive into each photograph and explore the story behind the image. 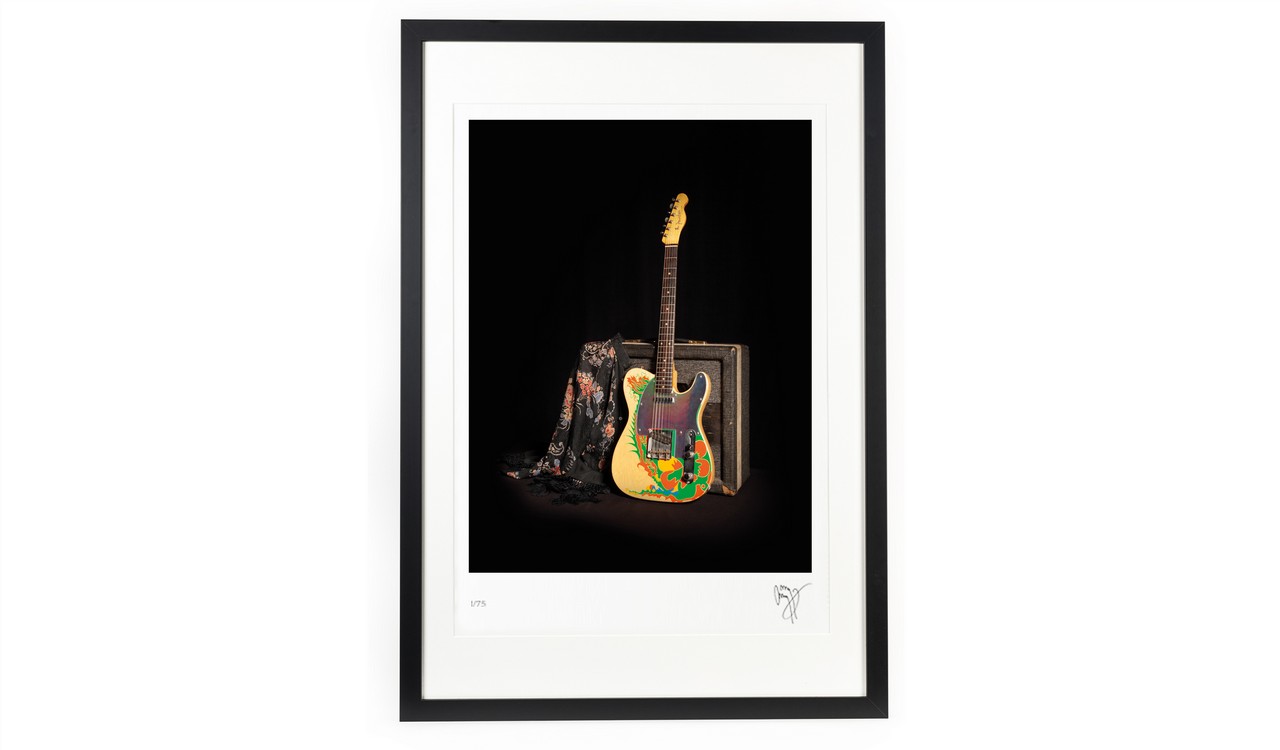 One of the most famous guitars in rock and roll history, the 'Dragon' Telecaster marked Jimmy's transition from the Yardbirds to Led Zeppelin. In The Anthology, Jimmy recounts how the guitar came to have the dragon design and how and why it was eventually refurbished to its original glory.

'When I began painting my Telecaster the pattern took on the imagery of a dragon. The painting started down in the main part of the body from behind the bridge, more or less where you put the strap lock on, and then it starts to become more ambitious towards the neck. Then there are all these little flourishes like the dragon's head and the breath and horns and things on the body where the volume controls are. So now it was the 'Dragoncaster'. Once it was created and painted it became like the legendary Excalibur as it travelled from the later recordings and shows with the Yardbirds, to the early shows with Led Zeppelin and the recording of Led Zeppelin I.' 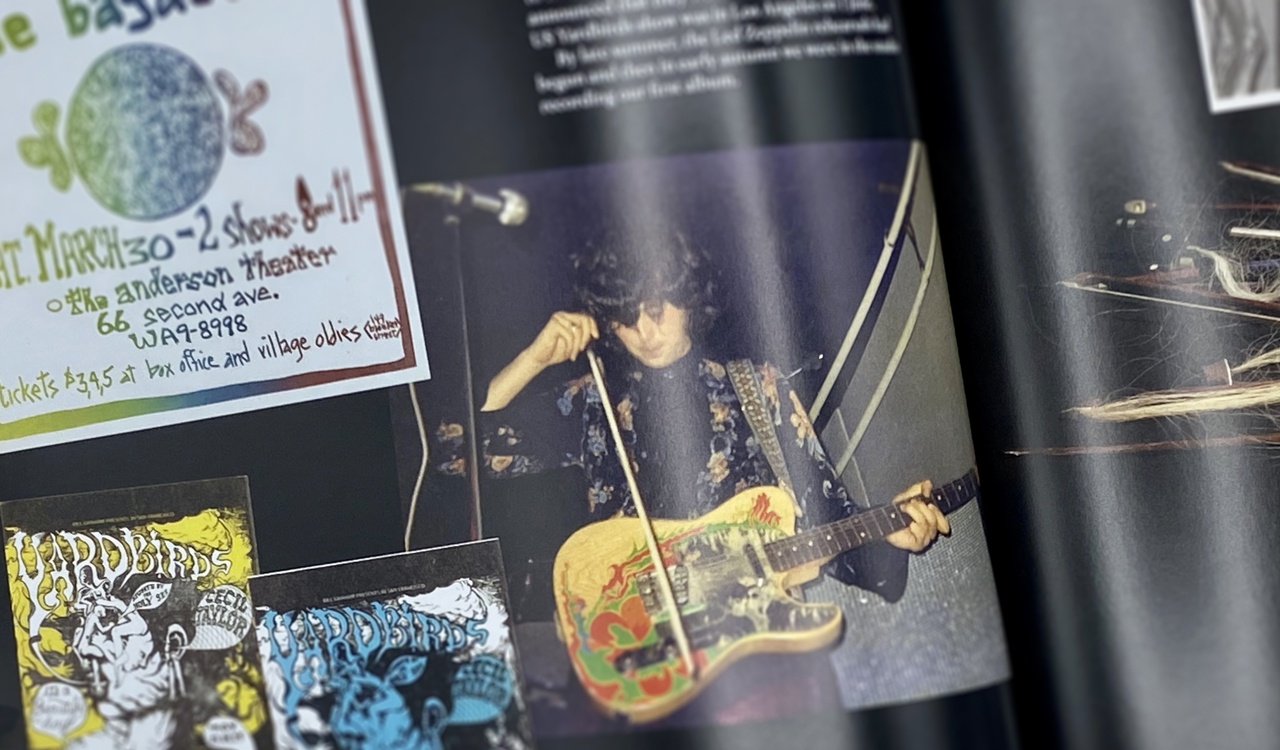 'My 'Dragon' Telecaster got damaged while I was away on tour in the States in 1969, playing with the Les Paul. The house sitter, an acquaintance, scraped off my painting and applied other artwork. Well, it was the Sixties, but this was still an unpleasant shock!'

'For the limited edition model of this guitar that I put out in 2019 with Fender, the original artwork needed to be recreated and repainted. I had the original reflective scratch plate as a starting point, and the guitar body now stripped of all paint. Then I worked with a graphic artist using archive photographs where we could see the grain of the guitar and retrace the outline of my original painting and produce the colours. It's jolly close to the original and I'm really pleased that I managed to do it.'

Jimmy comments on the significance of the shawl seen draped across the Supro Coronado 1690T amp in the print.

'I got my Yardbirds shawl from the Chelsea Antiques Market, London. I began to wear it when Jeff [Beck] left, because I thought it was time to change my image.' 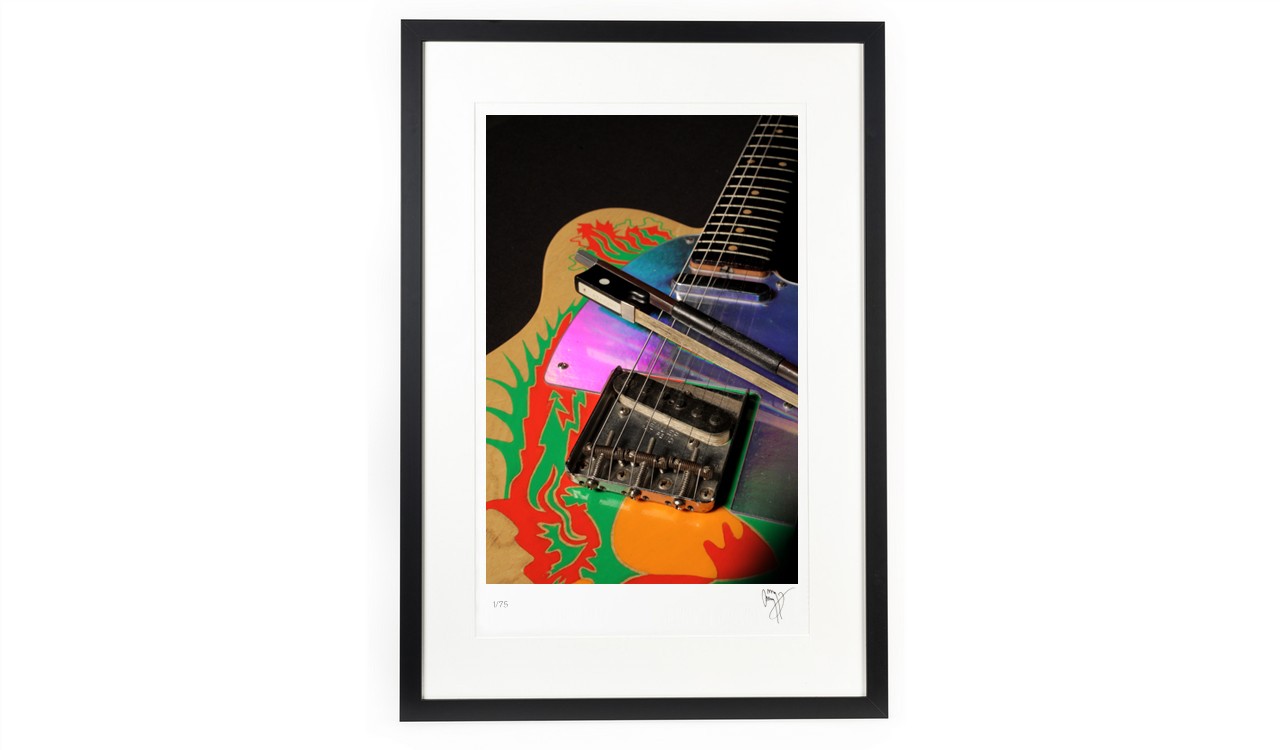 This limited edition print captures the unique pairing of guitar and bow that Jimmy made famous. Jimmy explains in The Anthology how he came to use the bow.

'My session years were a fabulous apprenticeship... I was coming up with things in the studio and working on them at home, being at the forefront and pioneering them, like playing with the bow and the distortion pedals and trying different recording techniques. Rather than staying a faceless musician in the session world, I was ready to get out there and play live.'

One of the first times Jimmy recorded with the bow was on the 'Degree of Murder' session with Brian Jones.

'It was a magical session and Brian was lovely to work with. As well as playing regular guitar, this was one of the first times I used the violin bow on a session. He asked me to come up with something and I took along my bow just in case. He was thrilled when I played it. 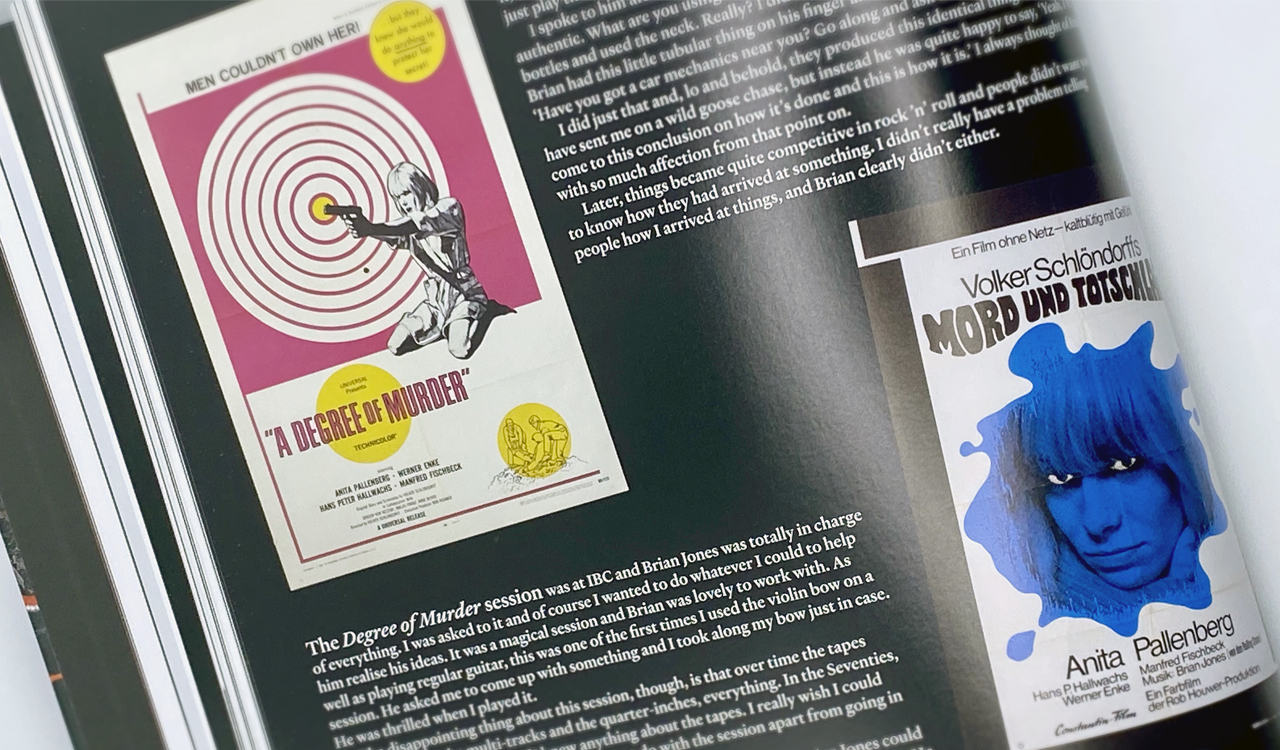 Later, Jimmy played with the bow during live performances with both the Yardbirds and with Led Zeppelin, when the bow was used with a Sonic Wave theremin and an Echoplex tape delay unit.

'I got my Sonic Wave back in the Yardbirds and it became a regular feature, used simultaneously with the bow in live performances. It gave people the chance to see something approached on a guitar that they'd never witnessed before in a live situation. I experimented with putting it through the Echoplex and changing the speed and intensity of the repeats. I started to construct these elaborate soundscapes with it, in the same way that I applied myself to the bow...' 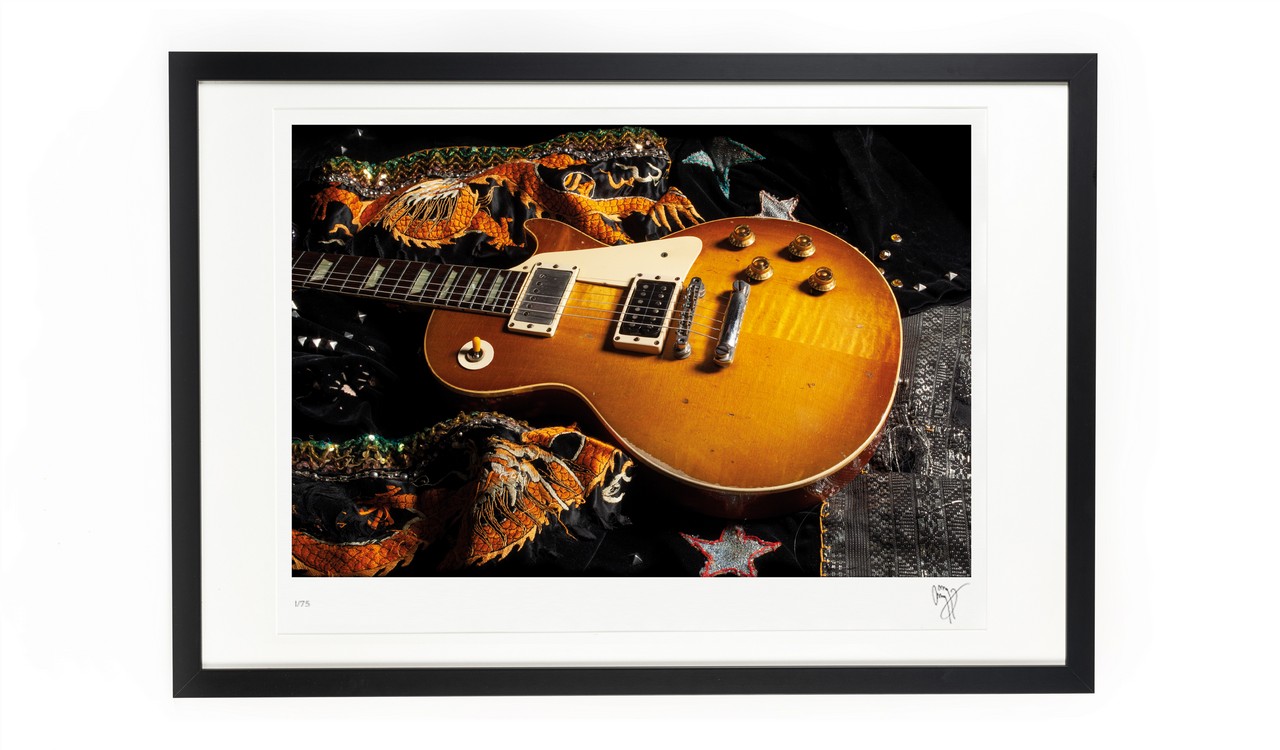 The Les Paul 'Number One' print features Jimmy's famous guitar and his beautiful dragon-embroidered and appliquéd Song Remains the Same suit. Jimmy recalls how he came to own the guitar:

'Joe Walsh brought a Les Paul Standard along to a Fillmore East gig on the first leg of the American tour and said, 'You've got to have this guitar.' I said, 'Well, I don't need it, Joe, I've got a Les Paul Custom... I just really enjoyed playing Joe's guitar that night, and so I agreed with him that maybe I should buy his Les Paul Standard after all. Neither Joe Walsh nor I realised at the time just what an important thing he had done by coming along with that Les Paul.'

It went onto become the main guitar for Led Zeppelin II and took over from the Telecaster on tour in 1969.

'Moving into the second leg of the American tour, I used the Danelectro on 'White Summer/Black Mountain Side' and the Les Paul. The Telecaster had been on the first album and tours until I converted to the Les Paul, which then became the main campaigner. I used it consistently throughout my career, including the O2 Led Zeppelin reunion concert in 2007.' 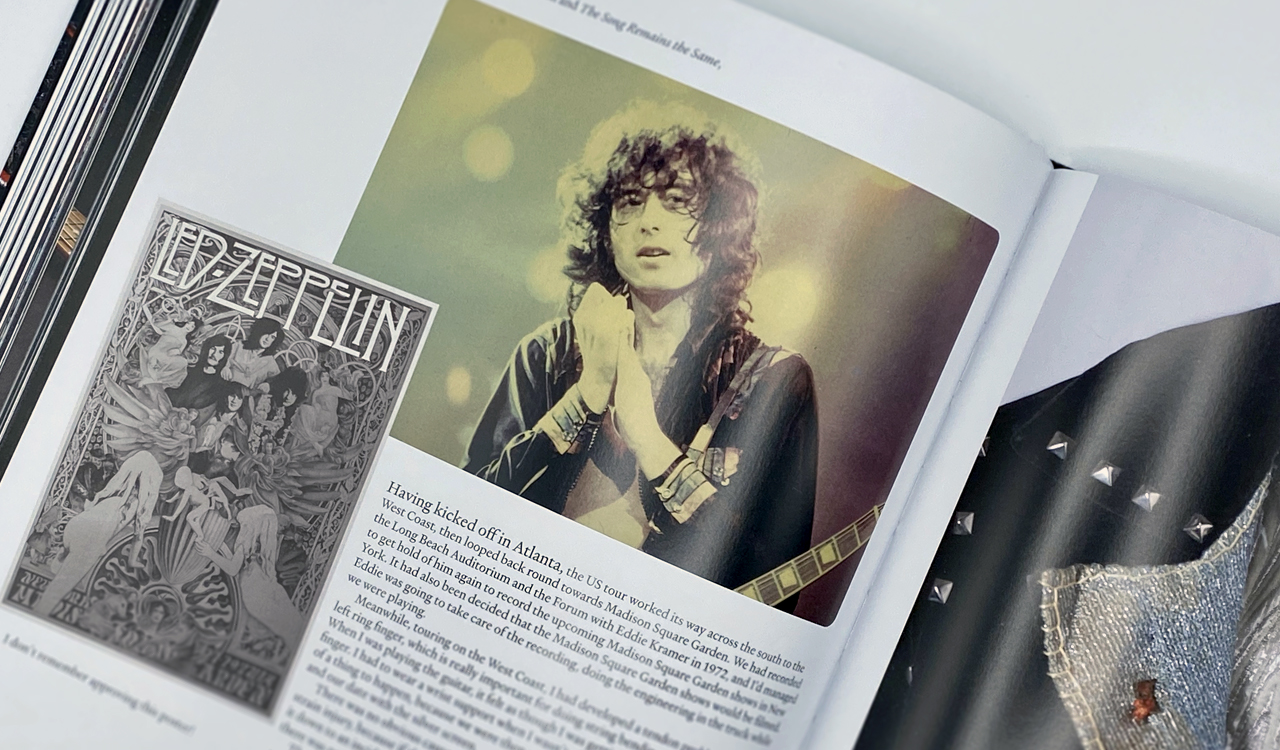 Jimmy comments on the significance of the Song Remains the Same suit:

'The idea of featuring dragons on my stage wear came from the Song Remains the Same suit. I wanted to extend the dragon theme and take it into the realms of kimono art. I had a customised dragon Tele, and now I was going to have a bespoke dragon suit.' 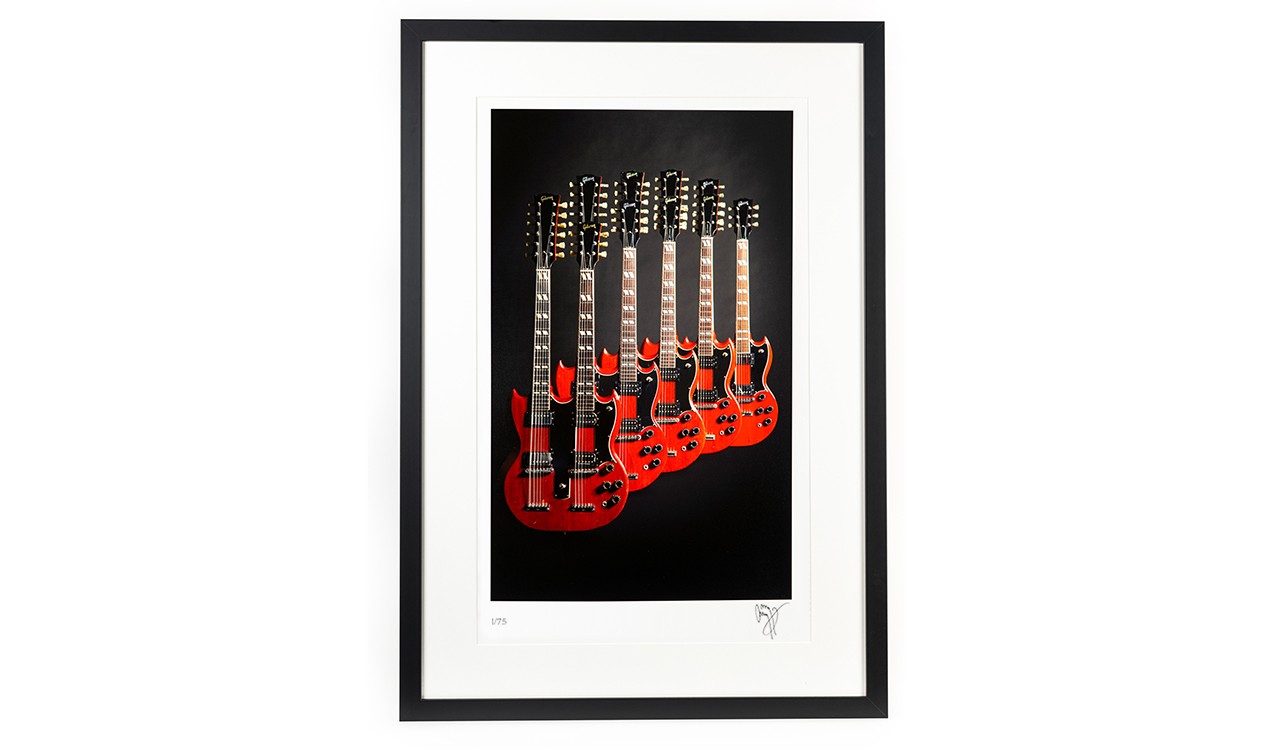 'Guitars have been photographed since the Fifties, but I wanted to do some shots and angles that nobody had come up with before, as far as I know. I thought it would make an interesting effect to have a row of double necks in which each neck eclipses the next. It's like the double neck guitar army standing to attention.'

Jimmy explains how he came to own and use a Gibson Double Neck:

'On the original recording I was so involved in creating the guitar parts for 'Stairway to Heaven' on the acoustic guitar and two electric 12-strings that I hadn't been thinking about how I was going to perform it all live. That's where the double neck - a 12-string and a six-string - came in. It wasn't the first one that Gibson had made, but it was soon to be the most iconic.' 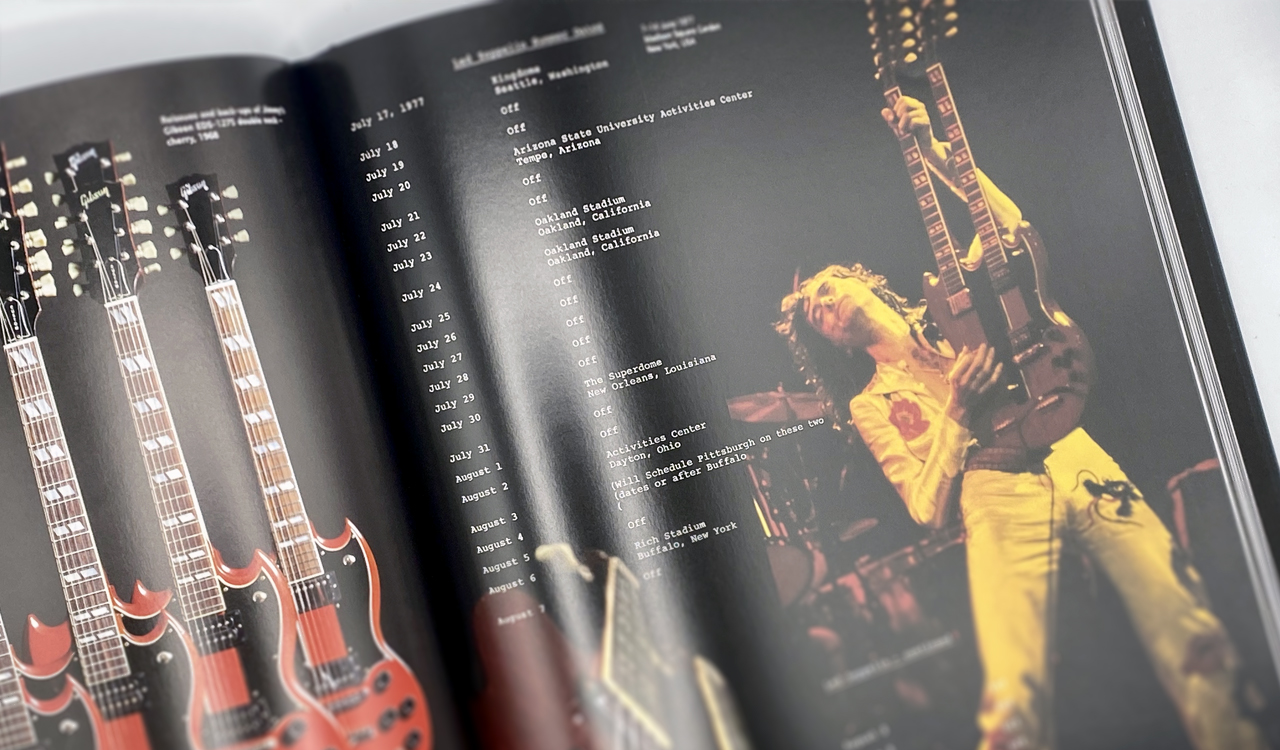 In 2019, Jimmy's Gibson Double Neck was exhibited at the Metropolitan Museum's 'Play It Loud' Exhibition.

'I was really impressed with the way the Met presented the exhibits. For example, they constructed a mannequin to model my dragon suit and carry the double neck, creating a 360-degree view.' 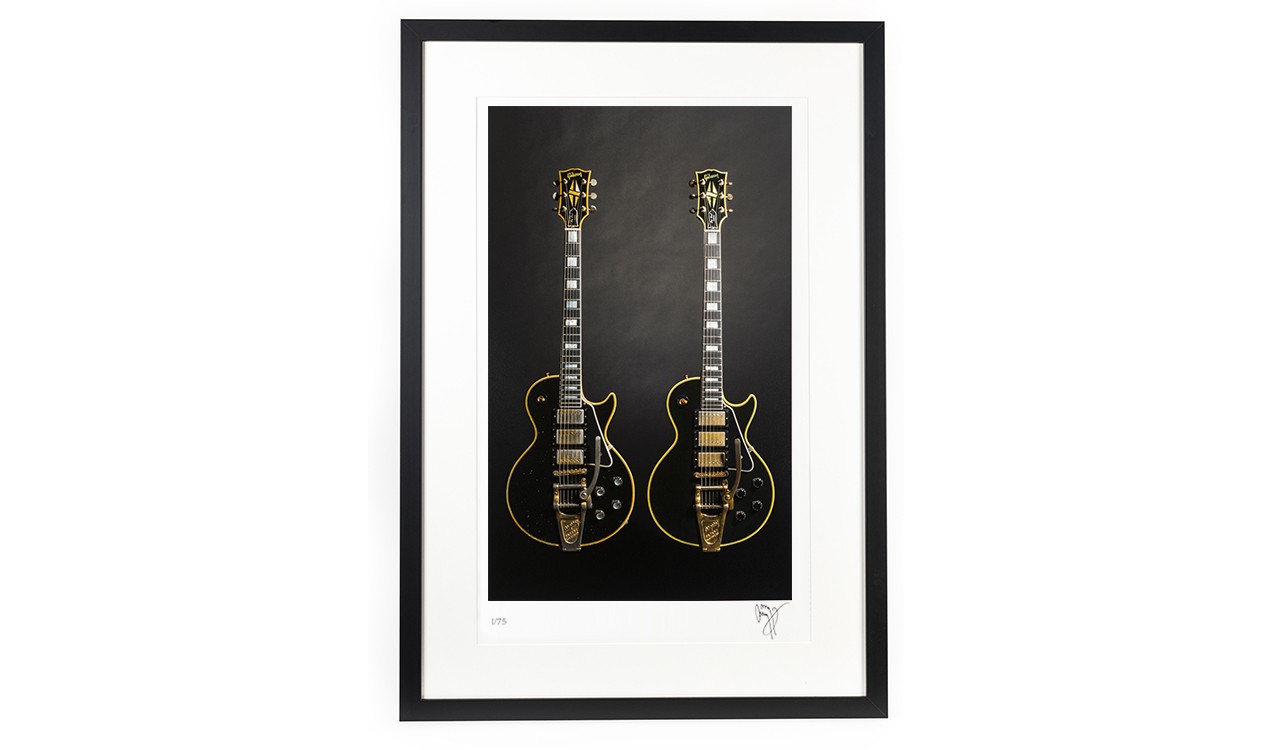 'In the early Sixties I saw my Les Paul Custom 'Black Beauty' in a shop on Charing Cross Road. When I plugged it in it was like a dream, I had to have it. I used it throughout my studio musician years on the majority of sessions so I was deeply connected to this guitar.' - Jimmy Page

Jimmy's Les Paul Custom guitar is a thing of legend. In The Anthology Jimmy explains how he came to own it, how it disappeared for 45 years and then finally returned.

'I went in a shop one day and there was this guitar hanging on the wall looking so bloody sexy in its black and gold. It was saying, 'Come on then. Come on, stop looking and ask them if you can play me.' The next thing was working out how to pay for it - all kinds of trade-ins and hire purchase plans, but I had to have it. When I was at art school I played in the interval band on Thursday nights at the famous Marquee Club on Oxford Street. I got headhunted for sessions out of there, so that gave me an extra opportunity to pay for the 'Black Beauty''. 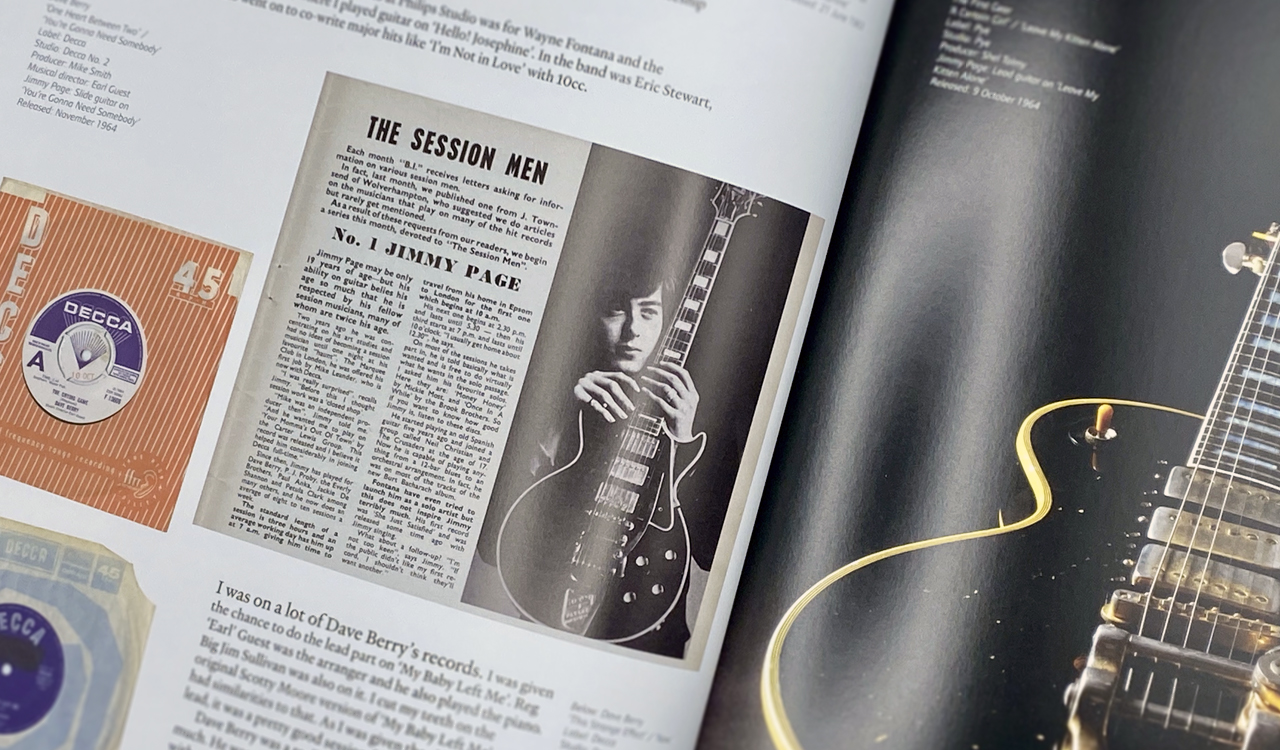 'In January 1970 I played my 'Black Beauty' with Led Zeppelin at the Royal Albert Hall. By April we were on an American tour, and after crossing the border into Canada the guitar failed to turn up. It had evaporated. My 'Black Beauty' had been stolen and remained lost for many years.'

'The guitar had become so iconic, featuring in photographs from as far back as my early session days, that Gibson wanted to make a replica. It was this Les Paul Custom reissue prototype, photographed on the right, that I played 'For Your Life' on at the Led Zeppelin O2 concert in 2007.'

'A good friend had made it his mission to find my original 'Black Beauty' and 45 years after it was stolen I received a call from him telling me, "I think I've found it". He was able to identify it as my 'Black Beauty' from the Royal Albert Hall footage: he saw that on the twelfth fret there was an unusual mother of pearl inlay that had a stripe across it. It was hard to believe I was finally going to get it back, but I did, and in time for it to be shown at the 'Play It Loud' exhibition at the Metropolitan Museum of Art in 2019.'

Explore The Anthology Portfolio in full and select your print from a choice of signed editions.

Jimmy Page describes the making of his career-defining book, Jimmy Page: The Anthology.