Home  »  Latest News  »  How Can It Be? The Premiere of Ronnie's New Video

How Can It Be? The Premiere of Ronnie's New Video 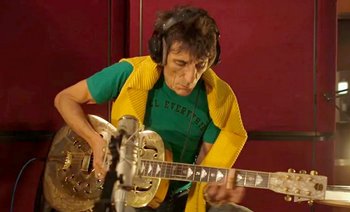 Click here to visit rollingstone.com and watch the worldwide premiere of Ronnie Woods new single: a 2015 reimagining of his 1965 composition, How Can It Be?
To revisit that song, I didn't refer to the original because I couldn't find a copy of it. But I still had a vague memory of it in my head, and I thought that instead of trying to revamp that, I'll just bear what I have in mind of the original and write a new song, basically.  Ronnie Wood
How Can It Be? was written by a 17-year-old Ronnie in his first band, The Birds, and released as a B-side to their cover of 'No Good Without You Baby'. The songs creation is documented in Ronnie Woods 1965 diary, the discovery of which inspired him to return to the studio. Both versions of the song are presented on a picture disc with Ronnies signed Limited Edition book, and as a download with every purchase of his Open Edition. Click here to order yours today.
Above: Ronnie recording at British Grove Studios