Today, Sir Jackie Stewart turns 81. The former Formula One racing driver had a dramatic impact on the world of motor racing and, arguably, was instrumental in forming Formula One as we know it today.

A three-time Formula One World Champion, he also raced in Formulas Two and Three, Le Mans, CanAm, the Indianapolis 500 and two eventful Tasman Series. He was awarded an OBE for his efforts to improve safety in racing driving, and has been ranked fifth in the Top 50 Formula One racers of all time.

'A scrapbook of this kind tells a tale in a way that a formal autobiography never can... Stewart was active in motor racing at a highly perilous time. It wasn't all good, this period of racing history, but the best of it was as glorious as the sport has known. This book captures it in its entirety.' - Motor Sport Magazine 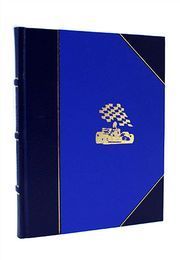