Christmas is a time to be jolly, and this year it looks like there will be one other reason to be so as Eric Clapton announces his first full-length holiday album.

Happy Xmas, which is co-produced by Eric Clapton and Simon Climie, will be released October 12th via Bushbranch Records/Surfdog Records, and will also feature an illustration of Santa Claus by Clapton on the cover.

The holiday album, which is comprised of 14-tracks, will be released just days after his two shows at Madison Square Garden on October 6th and 7th.

Happy Xmas mixes together the more traditional family classics, such as: 'Away In A Manger' and 'White Christmas', alongside more alternative seasonal selections, such as the original track: 'For Love On Christmas Day'.

What's more, the album will also feature a tribute to the late Swedish artist and DJ, Avicii, through Clapton's interpretation of another classic, 'Jingle Bells'.

'I had in my head that these holiday songs could be done with a slight blues tinge, and I started to figure out how to play the blues lines in between the vocals,' Clapton said in a statement to Billboard about the album, 'I got it down and one of the most identifiable songs on the album, the one that became the foundational style, is 'Have Yourself a Merry Little Christmas'.'

Happy Xmas is available for pre-order. 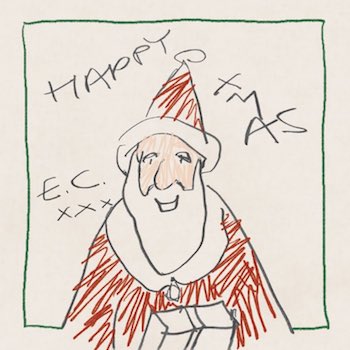