Exciting news as Def Leppard announces additional US Tour Dates after ending their huge North American tour.
Joined with rock legends Mötley Crüe and Alice Cooper, they are continuing with a list of new dates across the United States.
'After finally getting back on the road this past summer, we're beyond thrilled to bring this massive tour to a global audience including some special dates in America!' - Joe Elliott
The new dates will follow the UK and European leg of the world tour, starting with a show in Syracuse, New York on Saturday August 5 as follows:
August 05 - Syracuse, NY @ JMA Wireless Dome
August 08 - Columbus, OH @ Ohio Stadium
August 11 - Fargo, ND @ Fargodome
August 13 - Omaha, NE @ Charles Schwab Field Omaha
August 16 - Tulsa, OK @ H.A. Chapman Stadium
August 18- El Paso, TX @ Sun Bowl Stadium
Alongside this news, Def Leppard's Diamond Star Halos has been voted album of the year in Classic Rock magazine's annual end-of-year writer's poll. The album hit the Top 10 in both the US and the UK, and as well as in Germany, Finland and Australia.
'What we've delivered is the ultimate album for who we are now. We haven't had a buzz like this for ages.' - Joe Elliot
This comes hot off the heels of the Deluxe and Collector limited editions of Definitely by Def Leppard selling out, however, you can find more about the available bookstore editions at DefLeppardBook.com. 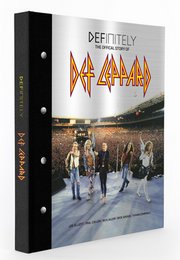