Today marks the 75th anniversary of the D-Day Landings. A pivotal point in the course of World War II, the actions of the Allied Forces on this day laid the foundations for the defeat of the Nazis in France, and the eventual liberation of Europe.
'Those of us who enjoy freedom around the world stand humbly in their giant shadow.' - Steven Spielberg from his afterword
In 2005 it was our great privilege to work with the surviving veterans of the 506th Parachute Infantry Regiment, 101st Airborne to create Easy Company, a book to honour the famous 'Band of Brothers' who will forever be remembered for their audacious acts of bravery throughout World War II.
We do remember, and are grateful for their heroism on this day 75 years ago, when they parachuted behind enemy lines to help capture and secure the route leading from Utah beach where the Allied Forces were landing from the sea.
In commemoration of the 75th anniversary of the D-Day landings, we are making available the last 10 copies of the Collector Edition and the final six copies of the Deluxe Edition of Easy Company 506th Parachute Infantry Regiment - In Photographs.
'What can we make of the men who made up the parachute infantry regiments? These men seemed to have been campaigning for the label of "hero".' - Tom Hanks from his foreword 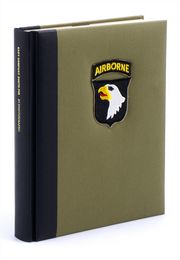 The Men of Easy Company