An English Heritage blue plaque commemorating two significant nights in music history is set to be unveiled later in London today (14th July 2022).
The plaque will mark the 50-year anniversary of a momentous weekend at London's King's Cross Cinema, now known as Scala, when the venue hosted the first UK concerts of Lou Reed, and the following night, Iggy Pop, to coincide with David Bowie's Ziggy Stardust tour.
Photographer Mick Rock was present both nights, after being introduced by David Bowie, and took many of the celebrated photographs that fans continue to associate with the musicians, including the album covers for Lou Reed's Transformer and Iggy and the Stooges' Raw Power. These now-iconic cover photographs were captured by Rock during the performances of the 14th and 15th of July 1972.
Thurston Moore from Sonic Youth, who will unveil the plaque at 17:30, described the events as 'blueprints for my entire life.'
'I like Mick and I like what he photographs, so shooting with him was never a problem. All of these moments would have been gone forever if it wasn't for Mick.' - Lou Reed
'I went to visit Lou to look over the results of that night's shooting. He was especially interested in the black-and-white contact sheets and quickly zoned in on a certain frame. The minute Lou saw the print, he said, 'That's the cover.''' - Mick Rock
Three of the images of Lou Reed taken on this night in 1972 are still available as signed art prints in The Transformer Series, a series of six prints from Genesis Publications that were chosen by Mick Rock and Lou Reed. There are very few of the prints - signed by the late Mick Rock with a Lou Reed estate stamp - still available. To order yours, click here. 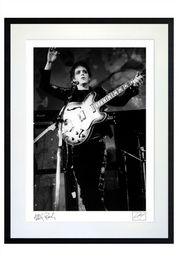