Bill Wyman Archive to be Auctioned for Charity

Former Rolling Stones bass guitarist, Bill Wyman, is to auction off items from his archive including instruments, guitar amps, stage-worn clothes, awards, personal items and artefacts from his days with Stones, as well as equipment and other pieces from his solo career all in aid of charity.

Of his immense collection Wyman said, "Collecting and archiving has been one of the great pleasures of my life and will undoubtedly be one of my legacies. It feels like the right time to share my archive with the world. I hope people will get as much joy from my collections as I have."

Amongst the many treasures up for sale are a 1969 Fender Mustang Bass Competition Orange ($300,000-$500,000) played by Wyman for Stones concerts and recordings in 1969 and 1970, a 1968 Gibson Les Paul Gold Top used by Stones guitarist Brian Jones for the Rock and Roll Circus performance, and a Vox AC30 Wyman used to audition for the band.

On parting with his collection Wyman explained, "It is easier to let these items go knowing that a portion of the proceeds from this sale will support three causes that are close to my heart: The Prince's Trust, Macmillan Cancer Support and CCMI (Central Caribbean Marine Institute) who are at the forefront of restoring the health of the world's reefs and oceans."

A public exhibition opens on 10th March at the Museum of Style Icons at the Newbridge Silverware Visitor's Centre in Ireland, with stops at the Hard Rock Café in New York City and Julien's Auctions in Beverly Hills. The live and online auction begins on 29th May.

Two Genesis limited editions speak to Bill Wyman's legacy: T.O.T.A. '75 features items from his archive played and worn on the mammoth 40-date Rolling Stones tour across the U.S. in 1975, and, as Executive Consultant and contributor, Wyman helped bring the iconic work of photographer Michael Cooper together in the publishing phenomenon that is BLINDS & SHUTTERS. 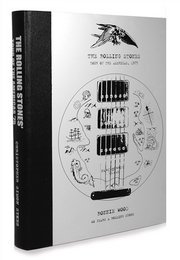