To celebrate Monty Python's 50th anniversary, Genesis are delighted to be publishing the Deluxe edition of Eric Idle's hilarious memoir, Always Look on the Bright Side of Life.

'The memoirs of a failed pessimist... If this isn't exactly what went down, it's certainly how it should have happened.' - Eric Idle

Eric Idle has played many a treasured role in Monty Python - from the Flying Circus to The Meaning of Life - anecdotes about which he shares in his book. From reflections on the meaning of Eric Idle's own life to behind-the-scenes stories, Eric's 'sortabiography' leads us on a journey from his childhood through to his successful career.

Exclusive to this Deluxe edition, which is limited to only 500 copies, items from Eric Idle's archives are published for the first time, including two draft lyric sheets signed by Idle himself.

To reserve your copy of this signed, limited edition, click here. 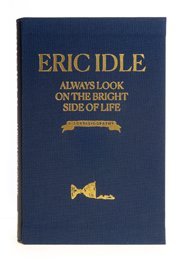