A Journal of Song

'There is talent and there is skill, but theres a certain amount of magic attached to songwriting.'  Paul Weller

Magic: A Journal of Song is a fascinating portrait of one of Britains most prolific songwriters. Magic combines a selection of over 100 lyrics from across Paul Wellers musical life, proving him to be the ultimate shapeshifter: from The Jams punk sensibilities to the genre-defying Style Council, through to a remarkable 30-year solo career. His third Genesis edition, Magic is narrated by Weller and illustrated with more than 450 photographs and pieces of ephemera throughout. A revealing commentary garnered over a series of conversations with journalist and author Dylan Jones covers the songs, the stories and inspirations behind them, and all of the 28 albums of Wellers ever-evolving musical journey.

'As a songwriter, Paul Weller has proved that he is not only beyond reproach, in some senses he is quite possibly without equal.'  Dylan Jones

'The thing I have discovered is that music in its truest sense is beyond any trend or movement or category.' - Paul Weller

The photography featured is pulled from a range of never-before-seen negatives and iconic shoots that chronicle Paul Weller in detail throughout his extraordinary career.
From the early days of The Jam, when the band played local talent competitions in Woking, through to performing in London, Tokyo and New York, Magic captures both the energy of their live shows as well as behind the scenes, in the studio and backstage. Later experimental images of The Style Council in Normandy and Paris recall the band's European influences. Weller's extensive solo career is documented by a range of photographers and friends, whose work shows Weller rediscovering himself as an artist.
Photography by globally recognised photographers is presented, including Janette Beckman, Julian Broad, Anton Corbijn, Jill Furmanovsky, Nick Knight, Mary McCartney, Pennie Smith, and many more. Together, their photographs capture historic performances, rehearsals, video shoots, and studio sessions.
Each album is personally introduced by Weller, alongside the album artwork and photoshoot outtakes.

'First and foremost, I try to satisfy something inside myself. And if other people get it and they share in it? That's fantastic.' - Paul Weller

Offering unprecedented insight into his creative process, Weller's personally curated selection of over 100 song lyrics is accompanied by an illuminating commentary of over 25,000 words. As told to journalist and author, Dylan Jones, Magic: A Journal of Song presents Weller's most candid and intimate account of his musical life to date. From founding The Jam as a teenager, through his time as one half of The Style Council, to his years as a solo musician, Magic is Weller's definitive document of his songwriting career.

'To play music is a pleasure. It's all I ever dreamt of doing. I have always taken it seriously, and I still believe in the cultural value of music.' - Paul Weller

Paul Weller is an award-winning musician with a career spanning almost 50 years. He has been an integral part of the British music scene since the early 1970s, when he founded The Jam. Following this, he teamed up with keyboardist Mick Talbot to create The Style Council, in which political statements were aired to nostalgic, summer-soaked melodies, and has gone on to have a hugely successful solo career. As a songwriter, Weller is considered on par with artists such as Paul McCartney and David Bowie and has received awards from the BRITs (Lifetime Achievement Award), NME Awards (Godlike Genius Award) and a GQ Award for Songwriter of the Year.

'Over the years, he has developed an encyclopaedic knowledge of dozens of different genres. But more importantly, he still writes and performs with the enthusiasm of a teenager.' - Dylan Jones

Dylan Jones is the award-winning editor and international best-selling author. A former editor at i-D, The Face, Arena, GQ, the Observer and the Sunday Times, he is a former media columnist and the author of over 20 books. He was the Chairman of the Prince's Trust's Fashion Rocks, a Chairman of the British Fashion Council, a board member of the Norman Mailer Writers Colony and is a Trustee of the Hay Festival and an ambassador for the UK's GREAT Campaign. In June 2013, he was awarded an OBE for services to journalism.

Magic: A Journal of Song is limited to only 1,650 Collector copies, each signed by Paul Weller.

Each Collector copy of Magic: A Journal of Song is fully bound in Imitlin, onto which an original, hand-drawn illustration is printed. Over 25 references to Paul Weller's lyrics are to be found within this specially commissioned cover artwork. The 360-page book is finished with red and gold foil blocking and gold page edging.
Collector copies also include two 8"x10" (200mm x254mm) lyric prints of one of Weller's favourite songs, 'Aspects', from his 2018 solo album True Meanings. Produced exclusively for the edition, Weller's handwritten lyrics to 'Aspects' are beautifully recreated over two sheets. The second print is numbered, stamped, and both are suitable for framing.
The signed book and print set are contained within a screen-printed and gold foiled archival case.

Magic: A Journal of Song is limited to only 2,000 copies worldwide. The first 350 copies in the edition are presented as Deluxe boxed sets.

Each Deluxe copy of Magic: A Journal of Song is numbered and signed by the author, Paul Weller. The 360-page Deluxe book is fully bound in imitation vellum, onto which an original, hand-drawn illustration is fine-screen printed. Over 25 references to Paul Weller's lyrics are to be found within this specially commissioned artwork. The Deluxe book is finished with red and gold foil blocking and gold page edging.
Next within the Deluxe boxed set, an envelope contains a number of signed and stamped art prints that are created exclusively for these copies. Reproduced as archival Giclées on heavyweight paper, the prints are suitable for framing (size: 8"x10" / 200mm x254mm) and comprise:
 A photographic portrait of Paul Weller, individually numbered and signed by the photographer, Peter Anderson

 Two prints of Paul Weller's handwritten lyrics to one of his favourite songs, 'Aspects', from his 2018 solo album True Meanings. At the end of the song, the second print is hand-numbered and personally autographed by Paul Weller


The resulting Deluxe book and print set is beautifully housed in a protective solander case.

A Journal of Song 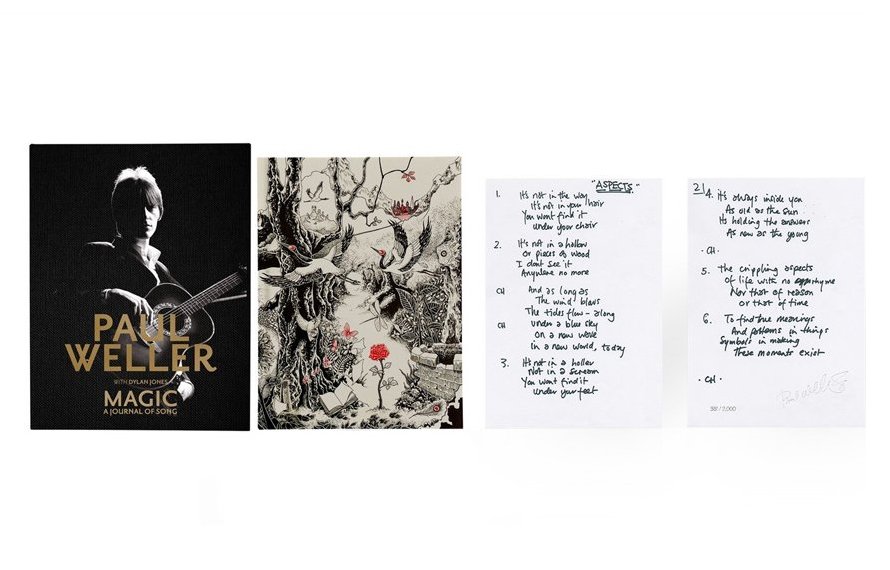 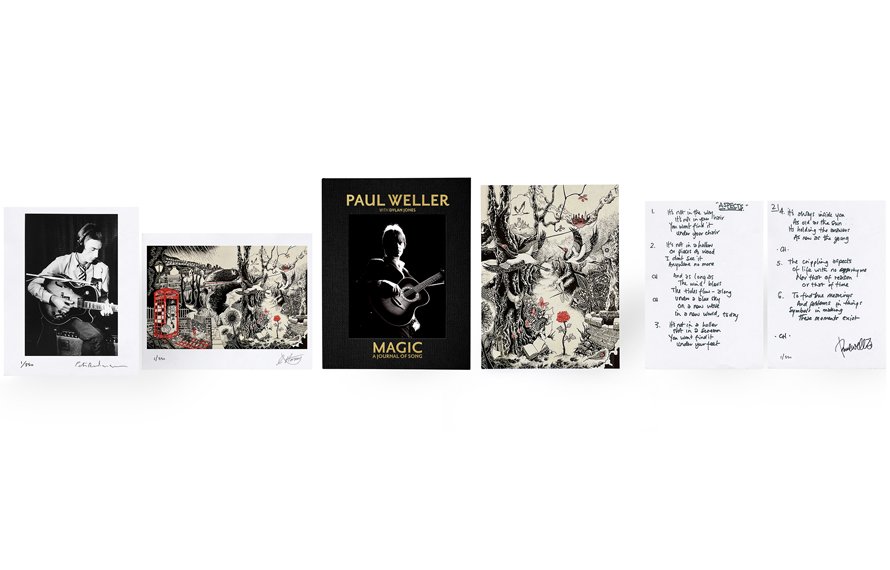 Shipping update to follow. Secure your copy at the pre-order price.
Available from £61.05 per month. Learn more >

In Magic: A Journal of Song, Paul Weller talks about his life and music through a personally curated selection of over 100 songs spanning his entire musical career.

Shipping update to follow. Secure your copy at the pre-order price.

In Magic: A Journal of Song, Paul Weller talks about his life and music through a personally curated selection of over 100 songs spanning his entire musical career.