The idea of a pocket limited edition has long been something we have wanted to publish. What better way to celebrate our 100th edition than to put four of our most sought after titles into a boxed set?

From the 1980s to the 2010s, GENESIS 100 spans four decades allowing readers to rediscover some of the most collectable works published on our journey to 100 editions.

24 Nights was published in 1991 the first of three Genesis editions produced with Eric Clapton and two with Sir Peter Blake.

24 Nights captures the excitement and creativity of Clapton's record breaking 24-night run at London's Royal Albert Hall, an incredible musical achievement. This sought-after collection of drawings and photographs is now available as part of the GENESIS 100 boxed set.

Clapton said of the book: 'The original idea, from which all of this has sprung, was that I would sit for Peter Blake, he would draw me, and we would then have a great album cover and a work of art in one, simple as that...' However, Blake wished to observe Clapton as he worked on music and performed; he wanted to investigate before committing himself to a single portrait. Blake joined the guitarist as he put on a series of shows at the Royal Albert Hall, sketching Clapton onstage, sound checking, and during the day. The result is a collection of artworks offering a fascinating portrait of what this historic musical feat looked like.

Clapton himself writes in his foreword to the book: 'I myself, am well pleased, I think it captures the essence of what is involved in putting on these shows at the "albert", and it is something I will always treasure as a personal souvenir of momentous times.'

The 24 Nights pocket edition reproduces handwritten forewords by Clapton and Blake. The book's 160 pages of photographs and drawings are themselves a piece musical history, affording an insight into the partnership between Blake's art and Clapton's music that continues to this day.

Pleased To Meet You

Michael Putland has been described as the photographer who manages to be everywhere at the same time capturing it all the seen and the unseen sound and vision.

Just prior to the Rolling Stones' 1972 world tour, Putland was asked by the Stones to be their official tour photographer. He happily accepted, and set about creating the classic images in this volume, capturing the very essence of the excitement and fascination generated by the band.

Putland's physical closeness to the Stones - he was often only feet away from them on stage - has resulted in a wealth of memorable images, from stunning live shots to intimate moments backstage. Mick Taylor, who introduces the book, describes the selection as: 'Personal, intimate, revealing... a wonderful collection of the Stones on tour captured off-guard, relaxed, intense, casual, always elegant.'

In breathtaking detail, Pleased to Meet You documents the Stones in the Seventies, which many consider to be the most interesting decade in the band's history, and beyond. Originally published in 1999 and quickly snapped up by fans and collectors, Pleased to Meet You was limited to 1,750 copies. Now published as a GENESIS 100 pocket edition, readers have a second chance to enjoy these peerless Stones photographs

In 1985 George Harrison was introduced to artist Keith West and so began a collaboration to produce a stunning set of watercolours illustrating the composers many memorable songs.

West, one of the finest botanical watercolour artists in the world, soon found himself travelling regularly from his cottage in North Wales to Oxfordshire to discuss the interpretations of Harrison's song lyrics to prepare his illustrations. The result, Songs by George Harrison, was published in February 1988 as a songbook of lyrics and commentary with fine watercolour illustrations and hand-drawn lettering.

Described in the book's original prospectus as a 'superb collection of art... with small paintings that possess an irresistible charm', Songs by George Harrison was limited to 2,500 copies and sold out very quickly. Harrison explained, 'in a world of crass, disposable junk, it's meant to be a lovely thing'.

The Songs by George Harrison pocket edition features over 100 pages of selections from the original, includes written contributions from Jeff Lynne and Elton John, and is the first chance in over twenty years to see and own this beautiful book.

Speed of Life is the creation of musician producer and actor David Bowie and photographer and designer Masayoshi Sukita. Narrated in their own words their extended photo essay follows the development of Bowies career across four decades from 1972 onwards.

Bowie met Sukita for the first time in 1972, and the pair began working together almost immediately. Sukita told Genesis: 'There was very little information about David Bowie in Japan and when I arrived in London I was immediately interested and intrigued.' The photographer had worked with Marc Bolan of T-Rex, and so was able to present his portfolio to Bowie's manager. A portrait session was organised, and so their collaboration began.

Speed of Life combines styled studio shoots with electrifying on-stage photography. But the book also includes timeless moments such as Bowie running down a street, laughing with friends, riding the Kyoto subway, and sitting backstage with Lou Reed. These pictures narrated with both authors' words make Speed of Life an intimate, memorable portrait of Bowie as a musician and artist.

Bowie said, 'This book represents a wonderful volume of memories.' Originally printed in 2012, a condensed 160-page pocket edition of Bowie and Sukita's joint work is now published as the last of four volumes available only within GENESIS 100. A valuable opportunity to acquire a much-loved and utterly unique insight into Bowie's life and work.

For subscribers around the world GENESIS 100 is a four-volume boxed set comprising a selection of some of Genesiss most rare out-of-print titles.

Specially redesigned for a smaller page size* and only available within this commemorative boxed set, the resulting pocket editions are quarter-bound in leather with foil blocking and gilt page edging. The entire collection is presented within a handcrafted, buckram-bound portfolio case.

The following loose-leaf items, exclusive to the boxed set, are additionally included:

We hope you will join us in celebrating Genesis's 100th edition. A portion of the proceeds from GENESIS 100 are being used to build and supply school libraries for children in developing economies. 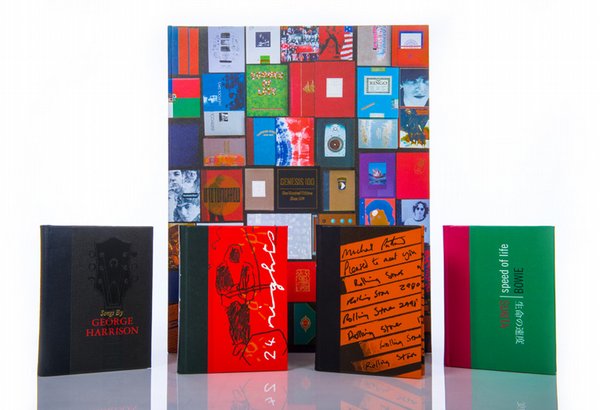 Celebrating 100 titles across 40 years of publishing. Working with Eric Clapton, Sir Peter Blake, and the estates of George Harrison and David Bowie, some of Genesis's most sought-after books are reimagined as a collection of fine-bound pocket editions.